Firefly-RK3288 development board has been an interesting, yet confusing story, at least to me. We’ve first heard about the Firefly board on July, but I was privately told in September that the board would only be sold in China by a T-Chip sales person, only to see it become available for $189 on Ebay, as well as on Taobao a few days later. But those first boards may have only been engineering sample, or more likely from a limited trial runs, as the company has now announced mass production had started. 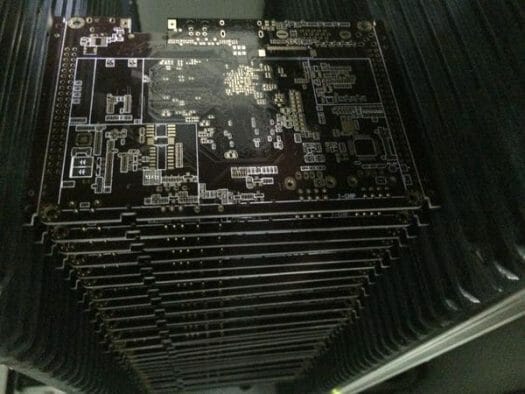 Let’s refresh our memory with the specifications:

The board is sold with two acrylic plates (bottom and top) with corresponding stands, a Wi-Fi antenna, and a power cable.

The company has published an extensive WiKi for the board inspired from Radxa website, which explains how to setup Android or Ubuntu, build the images from source. make use of drivers (ADC, I2C, GPIO. PWM, etc..) , and they’ve also released the schematics (PDF), and some other documentation.

It’s now quite cheaper to get the board, as GeekBuying sells it for $139.99 including shipping, and T-Chip also sells it by themselves on Aliexpress for $129.99 + shipping by DHL, which ends up costing $164.37 to Thailand, but at least you should get it in a couple of days, instead of a couple of weeks if you choose the cheaper option.

When it comes to Rockchip RK3288 development board, you basically have two options: Firefly-RK3288, or Radxa Rock 2. Radxa community has been setup in 2013 with the first Rockchip RK3188, and has many followers, but the company has opted for a more professional design for their RK3288 board comprised of a baseboard and a SoM. It has lots of features (including a 3G modem, a Gigabit switch, etc..), making it more expensive. So for hobbyists Firefly-RK3288 is probably the best choice for an RK3288 board, but for more professional usage, especially if you want to design your own product with an RK3288 SoM, the solution by Radxa should be more suited to your needs.

I really like this board and the RK3288 seems promising for 4K!
Albeit, I’m a bit confused by the choice of a VGA output instead of a eDP.

also, a link to understand more the Cortex A12 / A17 confusion: http://community.arm.com/groups/processors/blog/2014/09/30/arm-cortex-a17-cortex-a12-processor-update

@embedded_geek
Great post from ARM. So now I can just drop A12, and I’ll just use Cortex A17 like everybody else, since both are now exactly the same, except the later supports big.LITTLE.

excuse a n00b question but is it feasible to use this board as the guts of a home-build NAS box? the RAM limitation could be a problem but other than that … thoughts?

@embedded_geek
Except we better find out about the real 2160p video output of the RK3288 first, if it really scales it to 1080p framebuffer, and back to 2160p output, that would make it worthless as a media/video player… But as a CPU+GPU SoC it is pretty close to the best bang for the buck (Odroid-XU3 Lite might be better for pure CPU though?).

@anon you are absolutly right. I’ve spend quite a bit of time checking the doc and the community for this board and I’m less and less attracted by it. first, the datasheet is a pure joke. there is nothing in it. Then the code in the bitbucket website is a total mess!!! I search around for the GPU/VPU code/lib and… mystery! then you found some doc half chinese but with interesting hint like “decoding”, “video” but then again a bunch of crap. I’m not really sure there is something, linux wise, for decoding videos. I’m waiting someone to prove me… Read more »

@m][sko
so that’s pretty useless IMO. I would have like some gstreamer or mplayer linked with the VPU lib. Even if the source are not available.

@embedded_geek
By the way, I’ve learned since that my board has a fast Exynos 5422 processor @ 2.2 GHz (BIN1 in the log), not one of the slower processor @ 1.8GHz (BIN2) normally used in the Lite version.

@m][sko
So does that mean they already have GPU/VPU binary blobs for Linux, but it’s just not integrated, or are these for Android only?

FireFly currently working on CE/FCC mark, it will become on a shortly basis available in Europe and USA.

gst omx for sailfishos with libhybris
https://github.com/sailfishos/gst-omx
or something from official gst bugzilla
https://bugzilla.gnome.org/show_bug.cgi?id=734936

@Jean-Luc Aufranc (CNXSoft)
only android 🙁
I would really like to know where rk3188 linux drivers come from.
maybe we can ask picUntu developers 🙂
http://home.g8.net/

@Jacob Ritzema
Oh so that means GeekBuying and T-chip are currently shipping boards (single unit) worldwide without FCC/CE approvals. Could that be a problem with customs in Europe / US?

If you have a project, you may be able to get a free board (you just need to pay for shipping). Good news! As return for your long-lasting support and celebration for the mass production of Firefly-RK3288, our team is making a “Gift” plan and tends to give away some Firefly-RK3288 boards for FREE. If you have passion in electronic design, in innovation, or in Firefly, please send us an email to apply for the development board at apply t-firefly.com. Requirements: 1.Provide your name, country/region, personal website/blog, and projects (better with project homepage) working on. 2.Specify your usage/project plan of… Read more »

@Jean-Luc Aufranc (CNXSoft) If you check out the packaging on pretty much all “encased” (like TV sticks) ARM systems from China, they use CE as in China Export, not CE as in Communauté Européenne, that ALWAYS demand all new revisions to be conformity tested. http://en.wikipedia.org/wiki/CE_marking Another huge misuser of China Export mark are all those awful (Mascot clone) wallwart power supplies “someone” always complains about. 😉 Of course there is a huge market in EU area with ARM systems being bought by individuals from China/Asia directly (imported as “gifts”), and even commercial companies doing the importing on the grey market… Read more »

I received my board 2 weeks ago and i got ethernet problems, it’s very very slow. Did you notice that problem too

I Tried many images , just one worked for network but i dont remember which one 🙂

Pacopad (French supporter of your blog 🙂

@pacopad
I don’t own this board, but I’ve noticed some Ethernet issues with other RK3288 devices.
The firmware update can apparently fix this type of issue.
A quick workaround may be to connect the board via a Fast Ethernet switch instead of a Gigabit one.