Most Android TV boxes now come with either 8 or 16GB, and in my experience it’s usually enough for most users. However, as we’ve seen recently, while not being as powerful as Nvidia Shield Android TV box, Amlogic S912 TV boxes are suitable for gaming, and games may use a lot of space, and for example a PSP street fighting game took 500 MB space when I tested it. So if you need more storage space, you may consider devices such as YOKATV KB2 that comes with 32GB eMMC flash. 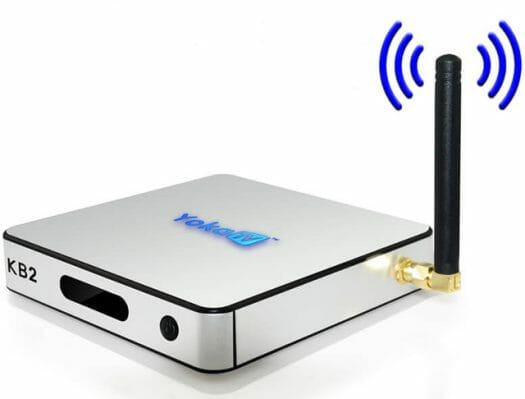 The device runs Android 6.0 with Kodi 17.0, and ships with IR remote control, a HDMI cable, a power adapter, and a user’s manual. 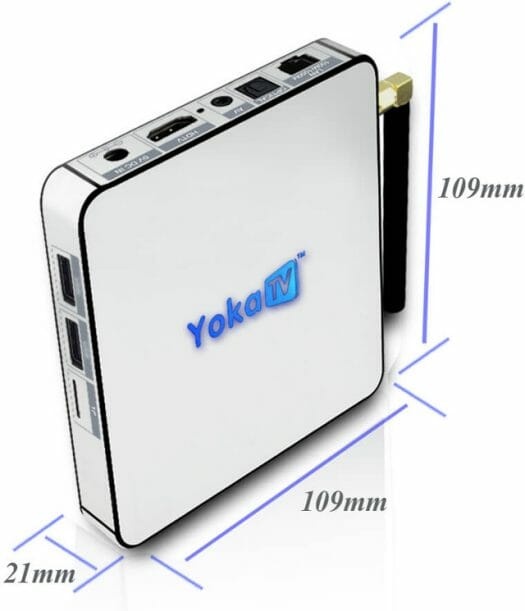 I first found about KB2 on GeekBuying where it is sold for $84.99, but the remote control is exactly the same as MECOOL BM8, and naming scheme is typical of Videostrong, so the latter is likely the manufacturer. I have not found any specific info about Videostrong KB2, nor MECOOL KB2 yet, but MECOOL BB2 look and specs are very similar, except the 32GB flash is replaced by a 16GB flash. KB2 is also only found under YokaTV brand in Alibaba, so it’s possible the companies have signed an exclusivity deal for the 32GB storage version, which appears to be based on Videostrong KB3 TV box design.

[Update: GearBest now offers the device for $63.99 with GBKB2 coupon]

“not being as powerful as Nvidia Shield” thats the understatement of the year.

S912 is the biggest dissapointment so far !

Use the shield’s thermal colling on a s912 and looks at it’s real performances ….

We have to wait a test of a well made product with a correct cooling before quote this SOC as a joke.

@Hulk Hogan
How many dollars is a Nvidia Shield?

Hulk Hogan :
…
S912 is the biggest dissapointment so far !

You have some proper sw and hw tests on various devices which supports that statement?

His grandfather is ZIDOO X6 Pro 🙂

@Rodrigo
only if auto-frame switching and DTS-HD audio pass through are supported. Otherwise yet another disappointing chipset and wait for the next chipset in the hope it has those essential media player features.

Wetek boxes support both, i dont have any s905 from them but i see on kodi forums it is working, Shield support also

@gizmomelb
The lack of automatic frame rate switching and DTS-HD audio support is not an issue with the SoC, and both features can be implemented on S912. So if you get a model from a company with a good history of providing firmware updates at some point in time both will be supported.

i notice on my s905 that the screen and resolution settings are spread about.

Play back settings to ensure hdmi self adaptation is on.

Paulin ARBOUX :
@Hulk Hogan
Use the shield’s thermal colling on a s912 and looks at it’s real performances ….
Can’t compare 10w to 3w solution ;).
We have to wait a test of a well made product with a correct cooling before quote this SOC as a joke.

So, these much cheaper S912 boxes could benefit from a simple 40mm fan mod?

On the internal memory limitations, since Android 6 allows apps to be stored to SD card using its new Adoptable Storage feature, can these boxes be set to do that and, if not, why not?

Some models of YokaTV have 2 HDMI IN ports. Do you know anything about them?

@Raven
I haven’t seen those models.

s812 soc runs at 1.6ghz (but 2.0ghz in benchmark ….). Initial heatsink were too small to keep full performance on long terme use (more than 10sec ….).
I changed the heatsink of mine but needed a firmware update to allow the soc to run at 2ghz for else than benchmark …

Note : with initial heatsink, A9 runs at 1.6ghz but the GPU was throttling …. Without the firmware update, I already gained 50% 3d performances ….

@Paulin ARBOUX
My s802 box still gets higher scores in 3Dmark than a s905, but the s802 gets warmer. It is a wonder why AMLogic did not bring the 8 core GPU to the s905 design. If the s802, s812 really run slower, that is a big jump on GPU drivers that were not mature, optimized.

Lack of silicon space on the s905?

@Winston
If it helps,

on Android 5.1.1 go to more setting in the add-on settings app, select apps, select download, have a memory card inserted or USB memory.

Click the apps one at a time. Some in their settings will allow move to USB storage, moving will free up internal rom storage.

Hope it helps others.

Note, I just use a generic SDcard. Slow cards may? Affect some programmes speed.

@Jean-Luc Aufranc (CNXSoft)
I’m hoping it will be useful for something like HDMI input streaming over the network, like this:
https://blog.danman.eu/using-tronsmart-pavo-m9-for-hdmi-input-streaming/

On the Videostrong product page I am trying to figure out the difference between YokaTV, Mecool, KM8 and BM8. All with pretty much identical specs. Looks like it’s only the mold and price. Then for each logo there are multiple listings with identical units except for the price. Do you know why they keep it so complex?

@Raven
Probably for some marketing or business reasons.

It is VideoStrong device (got one yesterday from VS as sample S912). Based on VS q20x device tree. I’m not impressed with firmware (Android 6.0.1). It supports OTA but no new fw available atm. WiFi chip is BCM4335 (same chip as used in AMPAK 6354) but not AMPAK solution.

And I dont get why they are claiming SD card up to 32Gb. Mine 64Gb Sony Class 10 works fine on all Amlogic devices (did not tested on MX and below).

@Stane1983
All vendors have to claim “up to 32GB SDHC card only” or MS wants to collect ExFAT patent license fee. ExFAT is the default format for SDXC with 64 GB+.

Most of the small vendors still add ExFAT Linux driver (but probably don’t tell or pay). The big names either don’t add it or they pay MS.

There’s no hardware difference between SDHC and SDXC. With EXT4 all cards work, no matter the size. But you have to format them yourself and Android doesn’t help you with that.

My wifi keeps turning itself off and now won’t turn back on, does anyone know where I can get the network rest code from. Or if there is another fix.

What a piece of crap! I just wasted 70€’s on a brick that lights up bue, when you plug it in. You might think we’ll ok if I just tap the Power Button, it should work right? Nope How about depressing the reset switch, then plugging it in? Nope that refuses to work to… About the only thing to haven’t done was to try hooking it up to a Windoze PC to see if it still registers there. And, thats only ’cause I run Linux on all my machines now. I would recommend looking elsewhere…. Or is this more of… Read more »

@Ichijoe
Have you been back to the seller?

@Theguyuk I was able to get a replacement from Deal Exreme. Sadly with whatever Firmware update it got in the past few weeks, both the WiFi, and Bluetooth have packed it in. Such WiFi that does exist goes up, and down like a Hooker. Thankfully the Ethernet seems largely stable. It’s my hope that a newer Firmware will turn up and, fix these bugs. Kodi v17 is as One would rightly assume is NOT ready for Prime Time. This said this Box seems to hate Jarvis (Kodi v16), just as much. Spend to much scrolling through a playlist, is almost… Read more »

You could try the latest SPMC build ( Android Kodi fork )

What are you needing to watch with Kodi ?

Can you change home launcher in main settings?

So What Features Does SPMC Have Over Kodi?

SPMC incorporates specific Android fixes and improvements too specific for the main code base
SPMC brings all Kodi features and provides some additional Android-specific fixes. Some of the changes include:

You are not the only one as another reviewer says:

Aside from that, as mentioned below, the box did not start well. I experienced multiple crashes from Kodi (16.1 and SPMC 16.4) to the home screen, and video performance issues in 4k and even 720p/1080p videos.

However, this was (almost) all resolved once I uninstalled the pre-installed Kodi 17 Alpha, and switched to the newer 17 Beta. The 4k content played fine (at least locally), and I haven’t experienced another crash so far.

With some understanding that the AmCODEC (Amlogic Hardware acceleration), would no longer be actively supported past Kodi v15. I’ve given more thought towards SPMC, since these Boxes are largely its target. Alas even SPMC suffers these same crashes too. As to the things I like to watch. These are largely streaming sites like Kiss Anime, or USTVNow. @theguyuk Have you updated to the 20160929 Firmware? From the sounds of it… Probably not, if not I would recommend you give it a miss, or at least manage a TWRP Backup first. For me some 4k stuff seems to play ok but,… Read more »

Showbox on Amazon or other app stores

Videomix internet search. go in to Videomix settings to enable all sources.

This will be my next development/demo server, since it has everything I need: – 802.11ac: bcm4335 with external antenna should do ok – at least 16GB eMMc: 32gb emmc is very nice – powered by usb: I’ll downclock this thing until I can power it by usb 3.0 (4.5W), should be possible – headless Linux support: with the source release by amlogic a working kernel should pose not a big problem, otherwise I’ll just use a chroot environment at first – only downside: crippled crypto extensions in all amlogic chips, otherwise 8 cores could be a real boost for my… Read more »

Seems they have a 1GB model too

Going of Geekbuying and Gearbest the Yoka kbs1, s905x based has two HDMI in ports on the side of the box. Whether you can record of them who knows?

@Theguyuk
Based on the price of the box, they are most likely acting as a simple HDMI switcher.

Can anyone suggest me a wi-fi extender that is certainly compatible with Videostrong YokaTV kb2?
I tried 2 WiFi extender Netgear but the tvbox does not see at all the signal provided by them