Nvidia demonstrated DRIVE PX2 platform for self-driving cars at CES 2016, but did not give many details about the SoC used in the board. Today, the company has finally provided more information about Parker hexa-core SoC combining two Denver 2 cores, and four Cortex A57 cores combining with a 256-core Pascal GPU. 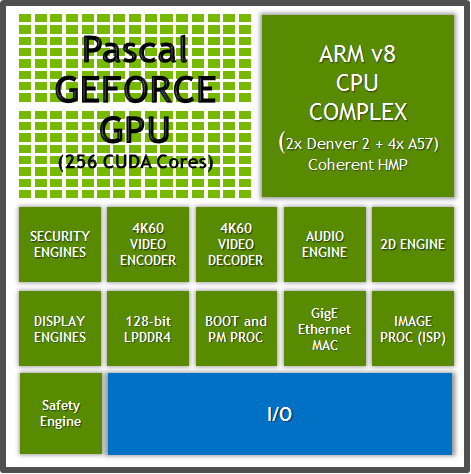 Parker is said to deliver up to 1.5 teraflops (native FP16 processing) of performance for “deep learning-based self-driving AI cockpit systems”.

This type of board and processor is normally only available to car and part manufacturer, and the company claims than 80 carmakers, tier 1 suppliers and university research centers are now using DRIVE PX 2 systems to develop autonomous vehicles. That means the platform should find its way into cars, trucks and buses soon, including in some 100 Volvo XC90 SUVs part of an autonomous-car pilot program in Sweden slated to start next year.

Using A57 in this seems downright bizarre…

Big.SUPER.. Clearly the super cores do something worse than the big cores. If it was power efficiency alone, A53 would’ve been the easy choice.

I have a tegra 4 powered tablet the Advent tegra Note and one thing about Nvidia is they know how to make their design fast and powerful. One thing I notice, is that’s a powerful GPU for in car use, are you really going to have a 4K high def large screen in the car?, I think not. Game playing maybe? Or is the GPU usable some how in general computing, car control, mapping surroundings? I have no idea what they intend. However the BBC Click technology show recently featured a Chinese self drive car programme, in which it was… Read more »

@Theguyuk They are going to use 4K cameras for better resolution for object detection and such, and yes they are going to use the GPU for general purpose GPU computing to speed things up. Now they get a massive amount of data from sensors (cameras, radar,…), and it requires a lot of processing power to handle all that. 4K displays might be good for GPS system too, and if the rear seats have some kind of display it can be useful two. Maybe one display for dashboard, one display for GPS/parking video feed, and maybe one display somehow placed at… Read more »

@Theguyuk
the GPU power is need into new cockpits by Audi, Lamborghini, Tesla and so on
https://blogs.nvidia.com/blog/2016/04/25/virtual-cockpit/

@Jibril
The Tegra 3 mentioned in the artical is what powerd OUYA consoles. The OLD RK3066 SOC has higher scores in 3DMARK. It is old tech finding use in smart appliances. I suggest.

What’s interesting in this is Security & safety engines including a dual-lockstep processor for reliable fault detection and processing. Would be good to have more information about it.

I work in the automotive industry software development business and I can confirm that the customers ( car manufacturers ) are beginning to ask for 4K displays so yes you will need to power 4K displays soon and usually about 3 of them. The advantage here is that the processing required here is much easier than what a game needs, this is a simple 3D guy that’s being rendered by the GPU and sometimes it’s even just some 2D images and stuff so it’s quite possible to do this with a reasonably powerful mobile GPU. The one in this Nvidia… Read more »