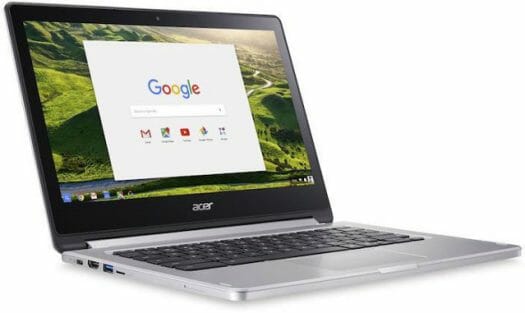 The Chromebook will also support Android Apps via Google Play Store (WIP). The 360-degree hing will allow you to use your Chromebook as a “ChromePad”/”ChromeBlet”, or “ChromeTent” as show in the picture below. 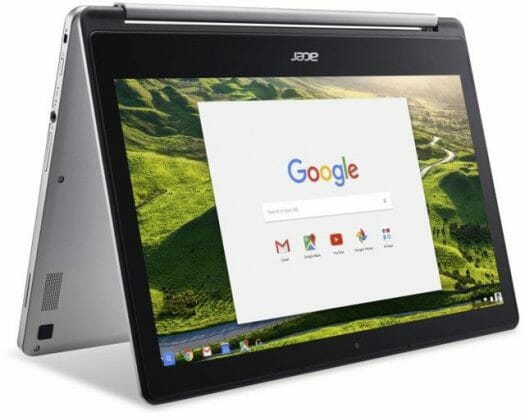 Just like Rockchip made a specific RK3288C processor for Chromebooks out of its RK3288 processor, Mediatek provided MT8173C specifically for Chromebook, but it’s unclear what the differences are with the original MT8173 processor. You can find part of the source code, including the device tree file on Chromium OS public repositories.

Acer Chromebook R13 will sell for $399 and up in North America, and in Europe, Middle East and Africa zone for 399 Euros and up starting in October.

Finally we got this one. Now it’s “Cave” time (Skylake based, most like ASUS Chromebook Flip 2). It was added to R53, thus most likely to be released before Christmas. Then we have Kevin (Rockchip 3399), 2xA72 4xA53. We have seen commits for high DPI 2:3 panels, GPU, hover support on touchpad, wacom support, etc. It’s not part of any Chrome OS release branch thus still in early development change. Then were is Google Chromebook Pixel and Pixel C. We don’t know what will be replacing those. Google just stopped selling Pixel.

About time for those 4GB of RAM.

If these can run Linux it would be awesome really.

Sorry. I don’t buy linux products over 200$ that aren’t mainlined. And I’m fairly lenient since I consider GPU firmwares as hardware rather then software.

Lenovo 300e laptop also based on Mediatel MT8173C -> https://www.youtube.com/watch?v=MOvwu7zrHA8&feature=youtu.be&a=
They can use a pencil as input device..