Espressif ESP32 WiFi + BLE SoC launched at the very beginning of the month, shortly followed by ESP3212 module, and while Adafruit sold a few breadboard-friendly ESP32 development boards to developers for $15 a few days ago, stock was limited, and it’s not possible to easily purchase ESP32 boards today, and that’s OK because firmware and software support is still in progress. Several companies are working on such ESP32 boards however, and they tend to show the development progress on social networks, so I thought it would be fun to look at what’s coming…

The current NodeMCU board is one of the most popular ESP8266 development platform, and that’s not surprising they are working on an ESP32 version. I don’t have pictures nor full  specs of the board yet, but the company showcased their early work on ESP32 last June.

I only discovered Widora recently via their NEO WiFi board running OpenWrt, but they are also working on Widora-air ESP32 board. 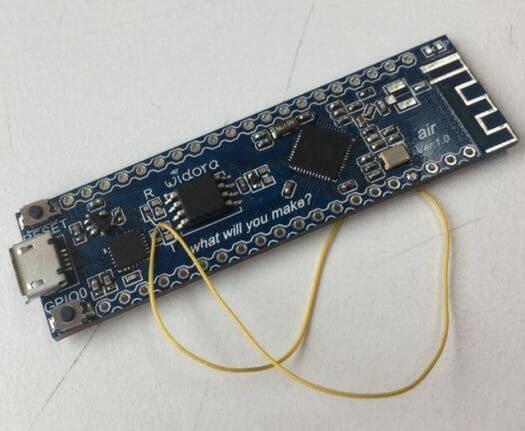 There’s no product page yet, but we can see the board is powered through a micro USB port, comes with reset and user buttons, a PCB antenna, and two 20-pin headers for IOs.

Nano32 clearly wins the best picture award of this post… It’s made by South East Asia based Gravitech, and combines ESP32 with an FTDI chip for USB to serial programming through the micro USB port. It also includes two buttons, and breadboard-friendly headers.

A chip antenna can be found on the top left of the picture. You can follow their progress on Twitter.

Noduino Quantum has a different form factor from the other boards in this list, as they’ve built an Arduino compatible ESP32 board, meaning compatible with Arduino shields.

ESP32 can be programmed through the micro USB port (Silicon Labs CP2102 chip), the board can also be powered via a power jack, and includes a PCB antenna. The company had also made an ESP8266 board called Noduino Falcon with the same design. More details can be found on Noduino.org.

Wemos has made both an Arduino compatible D1 board and a tiny D1 mini board based on ESP8266 in the past, and according to a forum post, the company is working on one or more ESP32 boards:

WeMos have confirmed an ESP32 board is in development.
Now whether it has a D1 form factor, D1 mini, or something new is still unknown.

If you are aware of other interesting ESP32 development board in development, feel free to let everybody know in the comments section.

I think I will pick WeMos board. Their boards are of good quality and cheap prices. I use their esp8266 arduino compatible as my main esp development

Is ESP32 supported in the Arduino IDE yet?

@Drone
Adafruit said not yet earlier this week when they sold the developer edition.

Until they start designing breadboards with 0.6 or 0.9″ center sockets, boards like the Nano32 won’t be ‘breadboard friendly’.

It’s almost like the board designers don’t use their own products.

There’s an AliExpress seller selling AI Thinker branded ESP-32’s, but it’s been over a week and they haven’t shipped them, so I’m not entirely convinced they even have stock.

Any if them is going to have FCC/C E certifications? Lot of boards is developed around esp32 lately, and instead of using FCC/CE approved modules, everybody is going with custom design just to be first, but designing radio emitting device is not the same as designing another clone of arduino uno.

Does this kind of adaptor would be ESP32 compatible?

Kids these days. Us old fogies simply run a jumper out to another row and gain more connections.

…and the Explore Labs breakout board (although it hardly qualifies as a development board).

https://www.pycom.io also lanched a project based on esp32 with development board. Using MicroPython as language.

Wemos ESP32 will be Wemos LoLin32, at least it’s the codename: https://github.com/espressif/arduino-esp32/pull/31

PlatformIO has some documentation with a list of supported ESP32 development boards: http://docs.platformio.org/en/stable/platforms/espressif32.html