I’ve been looking for ways to upgrade firmware on Rockchip RK3368 based GeekBox in a computer running Ubuntu 14.04, but while they’ve provided firmware update instructions for Windows, which remains basically the same as upgrading firmware on Rockchip RK3288, there’s no such information for Linux. However, I could remember than Radxa Rock supported upgrade_tool utility, but since the tool linked on Radxa website might be outdated, I instead searched for some RKtools repository on Geekboxzone Github account, and I was lucky enough to find one. 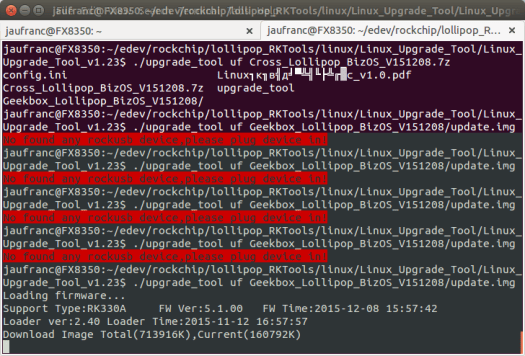 Here’s what I did to flash Light Biz OS to GeekBox with my Linux computer:

If you own an RK3368 Android TV box, instead of a development platform like GeekBox, it’s unlikely you’ll get a reset button, but you’ll probably have a Update or Recovery pinhole somewhere that you can press with a toothpick, while powering on your device, in order to enter bootloader mode.

Hello, While I do not own an RK3368 device(yet), it is always good to see a Linux option. My interest in the Geekbox remains high. As a hybrid system, the Geekbox should speed development on the 3368 platform, for all. Seems it has already had a positive impact.
Thanks for posting this How-to.

I don’t have Geekbox but I have Beelink i68 which has the same processor RK3368. Does this same apply to it?

@Viltzu
This tool can be used with any recent Rockchip device.

At first I thought you want to install Linux on the tv box – that is also my intention.

Only later I understood that you are just flashing another Android version on the box – with a tool running in Linux.

So I have to continue my search for a Linux solution for my MK68 box.

@bluepuma
I’ve never come around to testing Linux on RK3368, as they’ve been some issue with GPU and VPU support, but you can try/adapt the instructions for GeekBox development board @ https://en.opensuse.org/HCL:GeekBox, and/or read some relevant threads @ http://forum.geekbox.tv/