You may have all sort of remote control devices around your home from the traditional IR remote control for your TV, air conditioner, audio system etc.., as well remote control apps for WiFi or Bluetooth objects such as smart light bulbs or water pumps running on your smartphone. Sevenhugs Smart Remote promises to replace them all, and all you have to do is to point the remote control to your devices, or setup virtual actions to your door or window to order a Uber drive or check the weather. 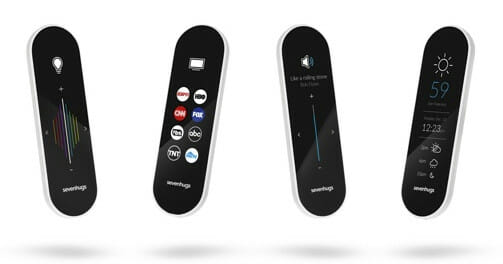 The remote comes with a charging base including a lost & found button to make the remote control ring in case you can’t locate it, as well as three room sensors to place close to the object/service your want to control, for example one close to your TV, the other on your door, and the last one next to your window. You’ll still need a smartphone running Android or iOS to install an app to configure the remote control for your devices, and currently 25,000 devices using Wi-Fi, Bluetooth or Infrared are supported with more being added daily. 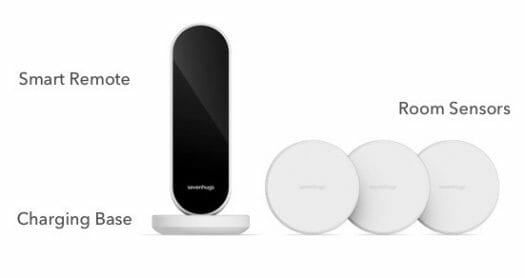 Once this simple setup is complete, simply point to remote to the device or service you want to control, and the screen interface will adapt to the objects pointed with for example volume control for an audio system, and weather forecast when pointing to a window. If you have several objects in a zone for example a TV with set-top box and AV receiver, you can use the carousel on the remote control to switch between each of them. This also means you can control other WiFi devices from any room in your home.

The company will also release a Lua SDK based in C/C++, first allowing to add new devices to be released in June 2017 but with an early release already available in github, and then allowing much more control over the remote such as developing custom gesture, screens, and menus. The Level 2 part of the SDK is scheduled for release at the end of 2017.

The remote control has been launched in Kickstarter, and have been very successful so far having raised over $700,000. Most early bird rewards are gone, but you can still pledge $149 to get  Smart Remote Kit including the charging base and 3 room sensors. Shipping is free to the US and western Europe, but for other countries it will cost you $20 to $35 extra, and delivery is scheduled for July 2017. More details may be found on Sevenhugs Smart Remote microsite.

I love all the rf tools coming out.. especially the LPWAN stuff (FiPy, Marvin, Badgerboard, etc).

But I wonder how much IR testing can be done with the Sevenhugs. I’ve been looking at Command Fusion’s Irlearner since it seems to be able to capture/display/tx just about anything IR. Unfortunately, that’s all it can do.. no wifi, no bluetooth. Hopefully Sevenhugs in the future will be more maker oriented!

Yes, it is a great Idea. It depends how userfrendly the programming is.