NVIDIA Shield Android TV box may have launched in the first part of 2015, but even at the end of 2016 it’s still one of the best Android TV boxes with a powerful Tegra X1 processor, 3GB RAM, 4K video support, HD audio pass-through, the fastest GPU found in TV boxes so far, Netflix HD & 4K certified, and more. The company is allegedly preparing to launch a new model, and some photos have been leaked to Android Police. 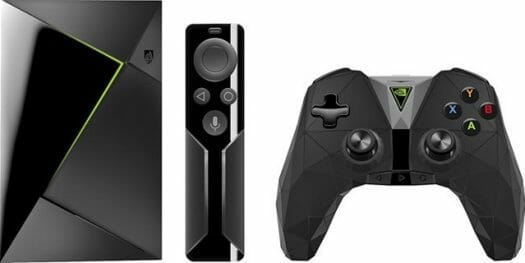 The design of the box looks basically identical to the new model, but it comes in two different sizes maybe because of extra ports and internal storage, and the game controller has been re-designed with a mix of triangular shapes.

What we don’t know are the specifications. The company may have done a simple refresh, keeping Tegra X1 processor, increasing the memory and storage capacity, and possibly adding some extra interfaces, or they went with one of their new more powerful SoC initially targeting the automotive market: Parker SoC with two Denver custom ARMv8 cores, four Cortex A57 cores, and 256-core Pascal GPU, or Xavier SoC with 8x custom ARMv8 cores, and a 512-core Pascal. The latter has only been unveiled recently, and supports 8K video with HDR, so it’s probably way too early for that… Another possibility is that the company designed a new unannounced SoC specifically designed for TV boxes.

We’ll hopefully find out more at CES 2017 in about two weeks time. This could also mean some good deals for the first generation hardware once the box is officially unveiled.

As a Tegra 4 based tablet owner I wish Nvidia would build a £75-65 TV box. They could easy inject life into the lower market. Just as they have high end and budget range graphics cards.

I was very enthusiastic in the past with nvidia Tegra K1, and I bought 2 Shield tablets for me and my family (not only because it was a great tablet, but because it had real OpenGL (not “ES”) support, Ubuntu support with accelerated drivers, possibly long-term support from the vendor, etc.). In practice, I am a bit disappointed because – only very few games take advantage of this powerful GPU (if only nvidia could encourage Steam guys to port SteamOS + encourage editors to recompile “real” games not only for SteamOS/x86 but also for SteamOS/ARM, maybe it would be different…).… Read more »

What I want to know is where are all the chromebooks, chromeboxes, and tablets with the Tegra X series processors?

Nvidia announced the X1 at the start of 2015! I’d have expected a lot of devices with it in!

For me both Nvidia and AMD Radeon could improve the TV box market but they seem to leave it to film and TV comsumption.
Lower priced games to tablets, phones and these

Which are S805 based! and S805 can play Riptide GP Renegade.

Hardly earth shattrring tech. Wonder if it is fear of secondhand Xbox 360 and PS3 market, you could buy one of those for that money.

@Paul M Well it seems there are far more economical choices when it comes to SOC’s to use in your android device. And if you can get good-enough performance with a cheaper product, why go with a more expensive option? http://www.nvidia.ca/object/tegra-phones-tablets.html A pretty sad list. That said, NVidia did manage to get Nintendo on board with an X1 (or better) powered device (the Nintendo Switch), so even if Tegra’s in the Android space are few and far between, it’s being used. I would love a low cost SBC with a Tegra though. Something under or around $100, and I’m there.… Read more »

Take an old Android phone with WiFi and screen casting capability and put it on your coffee table. Plug a “screen casting” dongle into the back of the TV. There is your Android TV box.

What am I missing here?

I bet that new shield will have same HW as new Nintendo.

Tegra X1 SoC/CPU/GPU die is currently manufactured using 20nm (nanometer) manufacturing process, which means you get less chips out of each wafer then you would using a more modern manufacturing method which can produce die at 14nm or 10nm (or even smaller), such as Intel does today. Manufacturing basically the same chip at a smaller size not only lower cost but also lowers the thermal output and doing so gives Nvidia an option to clock a such Tegra X1 chip at a higher clock-frequency. This it is however probably an economic choice to move to a newer revision of the… Read more »

@Harley While you mention more chips from reduced die are the reduce die manufacturers charging more due to increased costs?

@Harley You also have to take yields and initial factory costs into account. I’m not sure about the status right now but last year and early this year at least, 28nm process had the best bang for the buck, which explains why some new processors are still being released using 28nm. Now if you want more performance and/or lower power consumption it makes sense to go to 14 or 10 nm process but costs go through the roof. That’s why eventually it’s expected to have only 2 or 3 actual silicon manufacturers likely TSMC, Samsung, and Intel with all others… Read more »

Well if they will use the same new X1 chip in the Nintendo Switch as well then they might want something with a little more power right now and at the same time will cost less soon, and cost even less as time goes by with the normal lifecycle of a gaming console, which it should given the volume that Nintendo expect to ship their new console for the yeas to come.

One new feature is Google Assistant, but according Google said it will come to all Android TV 6.0 & 7.0 devices -> https://blog.google/products/assistant/coming-soon-google-assistant-android-tv-and-more/

“The evidences of this new model arise when thanks to a ROM developer that has discovered references to two new controllers, “stormcaster” for a new gamepad and “friday” for a new remote control.”