Yesterday I received two environmental monitors with Sonoff SC and vThings CO2 Monitor, and while I’ve plugged both, I have not had time to look into vThings documentation, but since I’m already using eWelink app for Sonoff TH16 wireless switch, setting up Sonoff SC just took me a few minutes, so I’ll report my experience with the device in this review. 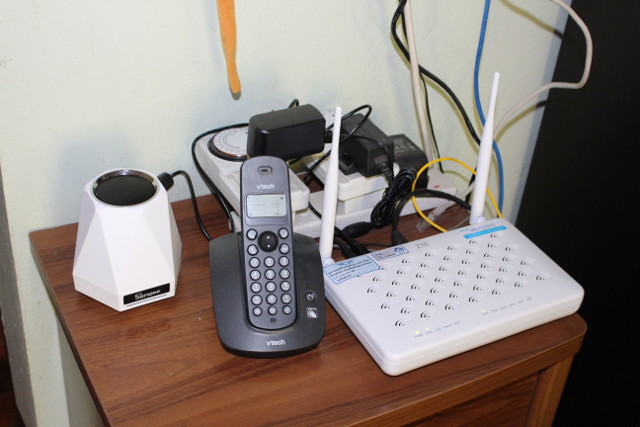 I powered Sonoff SC using the USB port of my modem router, and the green LED on the back of the device started to blink every 2 or 3 seconds. Then I started eWelink app in my Android phone and taped on the “+” icon to add a new device following the instructions here which are basically the same for all Sonoff devices.

Then you need to press the “Audio” button for about 5 seconds until the green LED blinks faster, at which point you can click Next, configure connection with your WiFi router, and complete registration by giving it a name, such as “Air Quality Monitor”.

Now Sonoff SC will show with your other Sonoff devices in eWelink app and show the air quality level, temperature, humidity and noise level. You can click on the > button to get to the prettier representation of the data as shown on the right screenshot above. The data was matching reality as the temperature was about 20 C at the time, and since it was still early morning, humidity was high.

I started to talk a bit loud, and Noise level changed from quiet to Normal. However when I turn on a headlight in to the top of the device, the light intensity was still at dusky… I took at screenshot a little later in the morning and the temperature had risen to 24°C, while humidity lowered to 53% normal, matching reality although probably not perfectly accurate due to the sensors used (e.g. DHT11).

Beside reporting data to the app, Sonoff SC can also be used as a smart hub to control other Sonoff devices. You can create “Scenes” by tapping on “…” icon in “All Devices” window, and add a condition (trigger device) using sensors from Sonoff SC or other Sonoff devices shown as “Air Quality Monitor” and “Water Pump” in the screenshot below.

However, while I could setup a trigger device (Sonoff SC) using the temperature data, I was not able to add an “Execute Device” despite having a Sonoff TH16 wireless switch registered with eWelink app and set in manual mode (e.g. not using external sensors to trigger it on or off).  I have a temperature and humidity sensor attached to Sonoff TH16, so maybe that’s why.. It might be only categorized as a “trigger device” and not an “execute device” despite also coming with a relay. I’ve contacted the company to see if there’s a solution.

Sonoff SC is sold for $19.99 + shipping directly on ITEAD Studio.