LeEco, better known for their smartphones, has unveiled two bicycles at CES 2017 that run BikeOS – a version of Android 6.0 operating system tailored to cyclists – on a 4″ display attached to the bicycles. The bicycle supports GPS/GLONAS navigation for cyclists, ride & fitness logging, and includes a compass, a barometer, a light sensors, as well as wheel speed and crank speed meters. 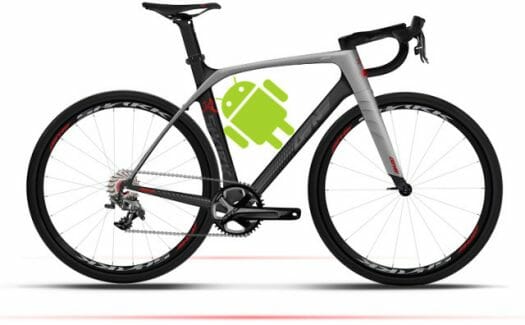 The bicycles can play music, and LeEco bike owners can talk to each other using the built-in walkie-talkie. The bicyckle’s display is powered by a Snapdragon 410 processor, includes a 6,000 mAh battery, and is rated IP54 against splashes and dust.

The company has not released pricing info, but plans to launch the bikes in the US in Q2 2017. It’s not the first time, we’ve seen Android on bicycles, but it was only stationary Peloton Exercise bike back in 2013.

You can save money and build your own “smart” bicycle just by strapping a smartphone onto any “dumb” bicycle out there.

qwiqooq :
You can save money and build your own “smart” bicycle just by strapping a smartphone onto any “dumb” bicycle out there.

And you will be much more smarter !! 🙂

I’m not sure a carbon frame for a mountain bike is a good plan. One good fall and your frame is cracked.
And the Suntour forks are not that high end.
Plus no front derailleur; so this may make it a nice bike in “mountain bike look” but definitely not a suitable MTB.