Samsung Chromebook Pro was first discovered last October on some reseller’s website with a Rockchip RK3399 hexa-core processor, 4GB RAM, and a $499 price tag. The company has finally announced two new Chromebooks at CES 2016 with Chromebook Pro actually based on an Intel Core m3-6Y30 “Skylake” processor, and Chromebook Plus powered by “OP1” hexa-core ARM Cortex-A72/A53 processor. 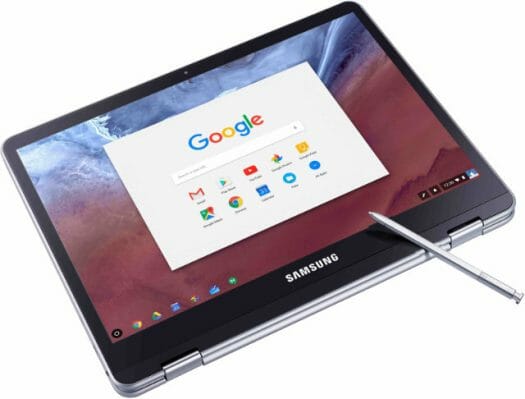 We’ll that apart from the different processor, both new Chromebook have exactly the same specifications

It’s very likely that OP1 processor is Rockchip RK3399, also using a 2xA72 + 4xA53 configuration, or a modified version, as Rockchip processor with Chromebooks used to have the “C” suffix, e.g. RK3288C. Charbax has a video of Chromebook Plus model showing the screen with an impressive viewing angle.

Chromebook Plus (ARM) is available now for $449 on Amazon US, while Chromebook Pro (Intel) will be released this spring at a yet-to-be-disclosed price.

The 3399 and A72 is a bit disappointing in the context of a chromebook. Its at a mere 10000 octane while the m3 variant is at 20000. For $50 more you get double the performance with the m3 variant so why opt for ARM? You can even get the Asus m3 version at $499 with 64GB SSD. I think ARM has missed the bus and is best left in phone and tablets which matches their closed device centric business model. I am not going to have any expections for general computing. With AMD Zen incoming I think there are going… Read more »

There are another two chromebooks based on the same Gru baseboard in development, bob (seems to be ASUS product) and scarlet.

“Software can be changed without notice.” No thank you.

I wonder if you could use dm-cache (eMMC caching a slower USB3 stick) on those chromebooks. As far as I have seen, they have replaced the standard USB2/3 by a USB-C, which makes it smaller to have USB sticks.

More A72 chromebooks is always good to hear. Some of them are taking their sweet time, though – I’m still waiting for Acer chromebook R13 to show up in Europe.

@Laurent
Amazing! I can even pre-order it form amazon.de! What a time to be alive.

@Sander
Better power efficiency (i.e. longer battery life), better overall performance. Also, I’m going to run linux on it anyway for development purposes, and since I tend to do low-level stuff, I’d prefer to have a modern ISA for my projects.

Charbax has done a article armdevices, saying what he thinks needs doing by Google to make Samsung’s chromebook Plus OP1 a success.

So seems people think there is room for improvement from the comments around the internet.