If you’ve been following this blog, you should know that Rockchip is working with Google on Chrome OS, so it was just a matter of time before a Rockchip powered Chromebook or Chromebox sees the light of the day. The first Rockchip RK3288 chromebook might end up being Asus C201 Chromebook with apparently a custom version of the Cortex A17 processor dubbed Rk3288-C, as OMG Chrome found out in Troxell’s 2015 brochure for K-12 education. 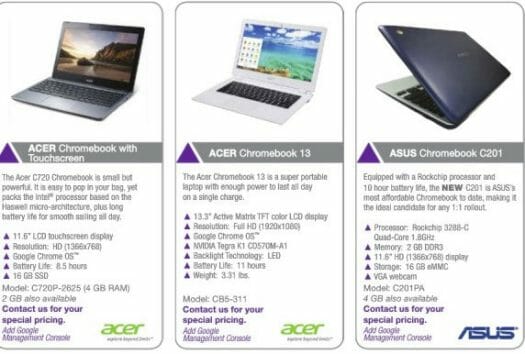 So far we only know a few details about the specifications:

The exact model name should be C201PA. Rockchip RK3288 should provide performance quite similar, and in some cases even better, to Intel Atom Z3735F, except possible when it comes to multimedia extensions, which may give an advantage to the Intel platform for tasks like video transcoding.

Troxell did not disclose pricing in the catalog, and instead asks customers to contact them for pricing. The company however says “the NEW C201 is Asus’s most affordable Chromebook to date”, so prices could be below $200. We can certainly hope to find out soon, as more RK3288 Chromebooks are announced.

Does this have any implications for linux support on RK3288?

Mainline Linux 4.0 rc1 kernel is already running on Firefly board.
http://wiki.t-firefly.com/index.php/Firefly-RK3288/Mainline_Kernel/en
Only wifi still has to be ported, everything else works.