Rockchip has joined other companies in developing camera SoCs with their RV1108 Visual Platform based on a single Cortex A7 core, a CEVA XM4 visual processing DSP, and capable of H.264 video encoding up to 1440p30 / 1080p60.

The processor is expected to be used in drones, IP cameras, car dashcams, sports/action cameras, as well as other applications such as panoramic cameras, computer vision applications, or real-time WiFi video transmitter. The company also released some comparison pictures and videos against a competitor camera showing the wider dynamic range of its solution. The competitor is likely based on either Allwinner V-series SoC or Novatek SoC. 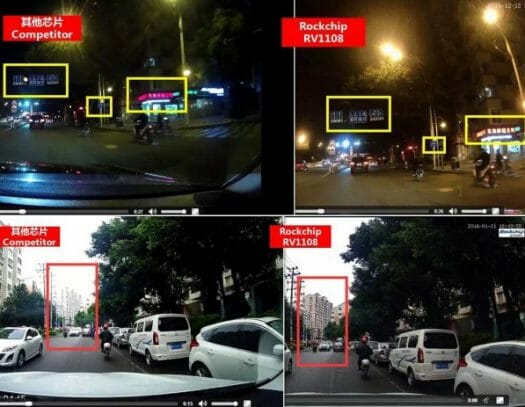 The text is much clearer with RV1108 in the top picture, the building has much better details with RV1108 in the second picture. I’m not sure how much of that is related to the sensor used however, as the company did not mention anything about that, and instead explained that their ” advanced graph and image processing technology, WDR(Wide Dynamic Range)technology directly influences the video shooting effect”.

RV1108 runs Linux OS with an optional MiniGUI, drivers for WiFi, Bluetooth, or GPS, and support for Android/iOS apps.

Rockchip was also at CES 2017 demonstrating RV1108 capabilities with a 360° camera demo pictures in the top picture, a streaming media rearview mirror, and a 2K VR camera. There’s no product page for RV1108 on Rockchip website yet.

That’s a DRAM next to the SOC. They’ll need an integrated version to penetrate this market. There just isn’t enough room on standard camera PCBs. This market is also brutally price competitive.

I have been asking for their SDKs to no avail for months, and I’m losing patience