Specific compression and/or encoding algorithms are used for video, audio, and files, and each time one watches a video, listens to music, or downloads a file from the Internet, the amount data has likely been reduced thanks to the implementation of one of those algorithms. Google has been involved in the development of some algorithms and their implementation such as VP8/VP9/VP10 video codecs, and brotli file compression. With the emergence of virtual and augmented reality applications and accompanying 3D mesh data, the company has also worked on 3D data compression, and just unveiled Draco.

A simple web search showed me some other 3D mesh compression tools are already available including Open3DGC and OpenCTM, but Google decided to compare Draco to GZIP instead, and it indeed offers much better compression than this general purpose file compression tool. Encoding and decoding also appear to be fairly fast, although Google did not compare the performance against ZIP or other compressors. 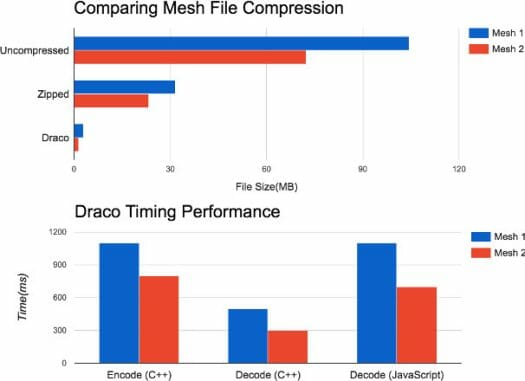 You can try it yourself in your browser (I used Firefox) with this example. The video shows the same sample loading with either Draco or GZIP decompression.

Draco is open source with the code available on Github.

If this can be applied to modern games it will enhance the amount of data to be transfered at once and timings of compressing / uncompressing.