Blu wrote BQ Aquaris M10 Ubuntu Edition review – from a developer’s perspective – last year, and now is back with a new post explaining how to develop and deploy OpenGL ES applications directly on the Ubuntu Touch tablet.

Ever since I started using a BQ M10 for console apps development on the go I’ve been wanting to get something, well, flashier going on that tablet. Since I’m a graphics developer by trade and by heart, GLES was the next step on the Ubuntu Touch for me. This article is about writing, building and deploying GLES code on Ubuntu Touch itself, sans a desktop PC. Keep that in mind if some procedure seems unrefined or straight primitive to you – for one, I’m a primitive person, but some tools available on the desktop are, in my opinion, impractical on the Touch itself. That means no QtCreator today, nor Qt, for that matter. 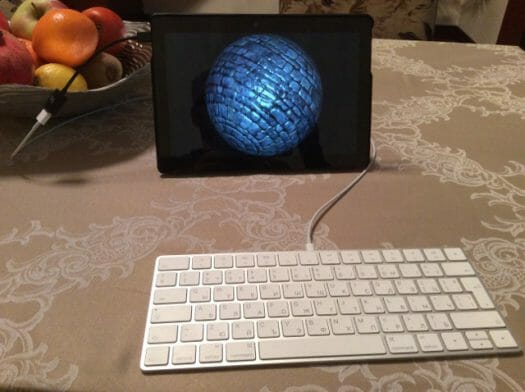 The display of any contemporary Ubuntu Touch device is powered by Mir – a modern compositor/surface manager taking care of all (rectangular-ish) things eventually appearing on screen. We won’t be delving much into Mir beyond obtaining an EGL context (EGL being the binding layer between GLES and the native windowing system). But enough ado – let’s get to work.

Preparations for doing GLES on a Ubuntu Touch box:

The above, as of the time of this writing, should provide you with gcc/g++-4.9, make and gdb-7.9, among other things. The last package and its dependencies provide you with up-to-date Mir headers. Git comes out of the box, IIRC, but if it’s missing just apt-get it.

We need a primer to step on, so here’s my adaptation of Don Bright’s Mir/GLES adaptation of Joe Groff’s OpenGL tutorials, using Daniel van Vugt’s Mir/EGL examples (yes, that’s a quite a chain-work):

I’ve taken the liberty to expand on the work of those gentlemen by bringing the Mir integration up to date, handling Touch’s novelty Desktop Mode and throwing in my own dusty GLES sample code, for good measure.

To build and install the primer, just do:

That will provide you with an original police-car flashing-lights primer. An alternative primer featuring tangential-space bump-mapping can be built by passing arg ‘guest’ to the build script:

Both versions of the primer use a fundamentally identical interface — a resource-initialization procedure and a frame-drawing procedure, so it’s not much of an effort to use the respective routines from either primers in the framework of the host app hello.cpp, and thus get a running render loop.

A few words about the peculiarities of the GLES development for Ubuntu Touch. It took me some time to show anything on screen, despite the fact I had a valid draw context and a render loop soon after the primer was building successfully. The reason is Unity8 on the Touch will not simply let you run a window-painting app from the terminal – you would get your Mir and EGL contexts alright, but the target surface will never be composited to the screen of the device upon eglSwapBuffers() unless you take certain actions. You have two alternatives here:

Unfortunately the second (much quicker and convenient) approach is not currently usable due to a bug, so we’ll stick with the first. Any command-line args we’d want to pass to the app will need to be written to the app’s .desktop file, which can be found at the official app location after installation:

In that file, set the desired args on the ‘Exec’ line, like this:

Another peculiarity was that in Desktop Mode the app window does a classical ‘zoom to full size’ animation at start. Nothing extraordinary in that, if not for the fact that the Mir surface itself resizes along with the window. Now, a default viewport in a GLES context spans the geometry of the target surface at the time of its creation, which, in our case, is the start of the window-zoom animation, with its tiny surface geometry. One needs to wait for the zoom animation to finish, and then set the viewport geometry to the final geometry of the Mir surface, or live with a post-stamp-sized output in the lower left corner of the window, if the viewport is left unchanged.

Once we get past those teething hurdles we actually get quite a nicely behaving full-screen app on our hands – it composites smoothly with all other Ubuntu Touch desktop elements like the Launcher tab at the desktop’s left edge and the pull-down Indicator pane on right (see screenshot). Our app even does live output to the Scopes selector screen (i.e. the task-switching screen) — behold the miracles of modern-day screen compositors! ; )

But hey, don’t just take my word for it – try out GLES coding on a Ubuntu Touch device – you have the basics covered:

In conclusion, self-sustained development on the Ubuntu Touch is a perfectly viable scenario (take that, iOS!). Moreover, the GPU in the BQ M10 turned out to have a very nice modern GLES3 (3.1) stack – see excerpts from the app logs below. Actually, this is my first portable device with a GLES 3.1 stack, so I haven’t started using it properly yet — the GLES2 primer above doesn’t make use of the new functionality.

If I have to complain about something from the development of this primer, it’d be that I couldn’t use my arm64 code on the primer, since there are only armhf (32-bit) EGL/GLES libraries available for the Touch. So 64-bit code on the Ubuntu Touch remains in console land for now.

Excerpts from the primer logs:

Some might ask “Is it worth investing money and time in Mir when Wayland is the way to go?”

Will GLES code written for Mir be fully compatible with Wayland?

@Arthur Frayn The only difference is in the “glue” EGL surface creation – once an EGL surface & context are set up everything else is the same across all EGL-supported platforms. Now, I’m only vaguely familiar with Wayland (which is still more than the zero familiarity I had with Mir before starting this primer), but the code for surface setup is not that different between the two client-side APIs. BTW, there appears to be a Wayland wrapper .so in the same folder containing the hybris .so’s [1] on BQ M10 OTA-14, and by briefly looking at it it appears to… Read more »

@blu
Thanks for the explanation.

It is probably critical to the future of Canonical (could Mir + Unity on tablets and phones finally be the path to profitability?) that Mir becomes the accepted replacement for Xorg, whereas the proponents of Wayland will be hoping that Wayland trounces Mir in the same way that systemd killed upstart which was created by Canonical . No doubt Redhat (a major backer of Wayland) would welcome that as another blow to one of their competitors.

@Arthur Frayn The good ol’ politics aspect.. I’m for standards as much as the next guy, but standards alone do not ensure smooth productivity – implementations of those standards and long-term guidance for those standards matter just as much. As long as there’s a sufficient degree of functional equivalence between Mir’s and Waylan’s clinet sides, AND the implementations don’t do something stupid behind the scenes (like breaking things just because), I don’t mind. At the end of the day, if a couple of hundred lines of boilerplate code, written once and forgotten about for the next few years, can get… Read more »

The underlying issue is whether long-term guidance is financially feasible.

Economics (ie Ubuntu phones are not selling, so no profit to be made there) trumps all.