Sonoff POW is an ESP8266 based wireless switch with a power meter that comes pre-loaded with a closed-source firmware that works with eWelink app for Android or iOS by default. But we’ve also seen Sonoff POW, and other Sonoff wireless switches from the same family, can be flash with open source firmware supporting MQTT (Message Queuing Telemetry Transport) lightweight messaging protocol such as ESPurna, and I initially sent data from Sonoff POW to ThingSpeak via an MQTT broker (mosquitto) to draw some pretty charts. I did that with the switch connected to a lightbulb, but I’ve since installed Sonoff POW in my office to measure the room’s power consumption minus the ceiling light and aircon as shown below.

Sonoff cable mechanism is really a pain for hard copper wires, as they are hard to push inside the mechanism, and something come out. I finally managed by it took longer than expected to install. I had to cut the mains cable, and rewire the gang box too. The good thing is that I did not need to drill a hole in my wall, as the device is very light.

I could see the power value updated in ESPurna web interface, depending on the load on my computer, and whether I turned on or off other devices. That’s all good, but instead of using ThingSpeak, whose open source implementation is not updated, I decided to try Domoticz, and already wrote a short guide showing how install Domoticz in NanoPi NEO ARM Linux development board. I had not gone through the setup yet, as I had to study a little more, and upgrade Sonoff POW firmware first. I also planned to use vThings CO2 monitor with Domoticz, but canceled since it can’t be configured remotely, and a USB connection is needed.

So I’ll focus only on Sonoff POW in this post, and first we need to update the firmware since Domoticz support is only recent. I’ll assume you have already followed the post entitled How to Build and Flash ESPurna Open Source Firmware to Sonoff POW Wireless Switch.

First we need to update platformio and ESP8266 development platform to the latest version otherwise we’ll get some build issues:

I updated the source code with git pull, but for whatever reasons the build failed, even after cleaning the code. So I did what any developer with enough experience would do in that case: start with a fresh check out ;), and rebuild the OTA firmware from there:

In order to update the firmware over the network, you’ll need to change sonoff-pow-debug-ota section in platformio.ini with your own IP address (upload_port) and password (in upload_flags) used in ESPurna web interface:

Once it’s done, you can upgrade the firmware, and then the file system as follows:

The Sonoff POW will reboot, and cut the power for about 2 seconds after both updates. My Sonoff POW is controlling my computer power, but that’s OK since I’m behind a UPS. Now I can access the web interface, and one of the improvement is that you’re being asked to setup a new password right after the update.

I was then redirected to the Status page showing power, voltage (a bit low?), current, and power factor.

I then jumped to MQTT menu to set the IP address to my NanoPi NEO board, and clicked Update.

There’s a new DOMOTICZ menu which we’ll check out a little later.

Installing and Configuring MQTT in Domoticz

ESPurna communicates with Domoticz via MQTT, so the first task was to follow and adapt Domoticz MQTT wiki.

We then need to go to the Hardware page in Domoticz and configure a new “MQTT Client Gateway with LAN Interface” as shown in the screenshot below. 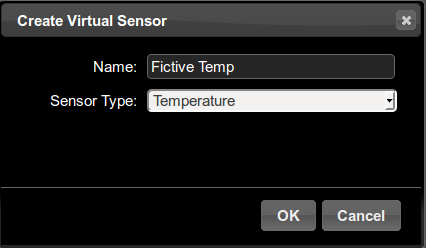 Now go to the list of Devices (Setup->Devices) to check the idx value (1 in our case), and a publish a MQTT message to update the temperature value of our virtual sensor: 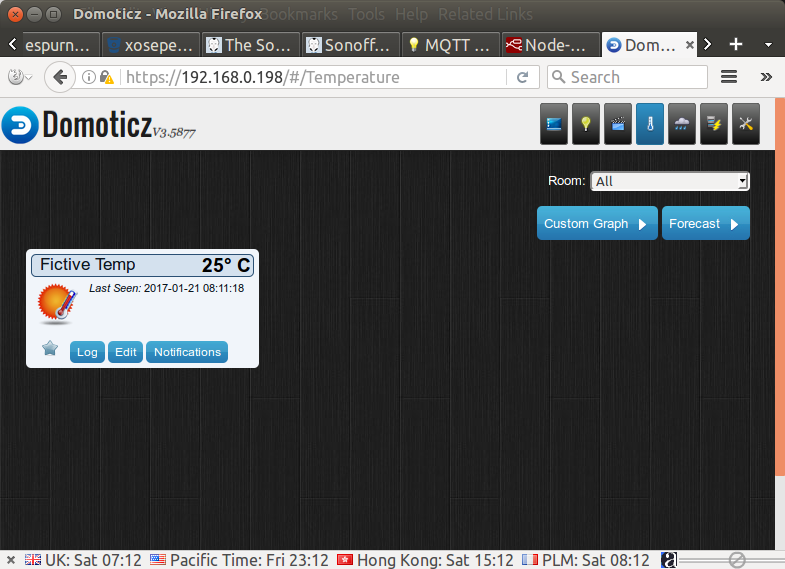 The temperature switch from 0 to 25°C. Our installation is working. Great!

In theory, we should be able to get two type of data for Sonoff POW: relay status and power levels. However, after looking at ESPurna source code, domoticz.ino only seems to handle the relay status that can be changed from Domoticz web interface, but the power values are only send in pow.ino to the MQTT server, with data not directly compatible with Domoticz. Maybe I missed something as Tinkerman – ESPurna developer – can use Sonoff SC to send temperature data to Domoticz. Alternatively, it might be possible to convert that data somehow with Node RED, but that’s something I’ll try later. So today, I’ll only try to control the switch from Domoticz.

To do so, I created another Dummy device called Sonoff POW Switch, and from there, another Virtual Sensor of Switch type. 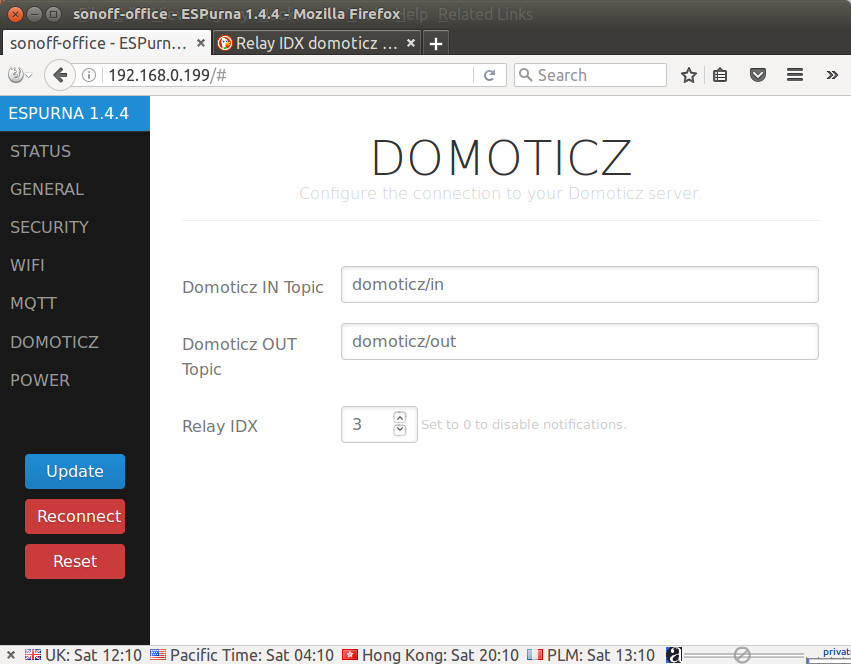 Now I can go Domoticz interface in my phone, and not my computer since my office’s Ethernet switch will be turned off, click on the Switch tab, and turn on and off Sonoff POW by clicking on the lightbulb as shown below.

It works fine, however note that the initial switch status was wrong (off instead on on), despite the switch sending regular updates to the MQTT server.

Normally, at this stage, it should be easy simply install NanoPi NEO outside the office close to my router in the living room. But I’ve come across a few issues doing so, which I’m going to report. 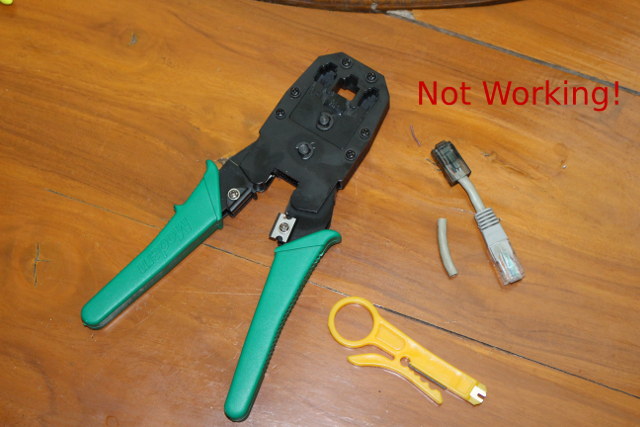 First I decided to make a very short Ethernet cable to connect NanoPi NEO directly to my router. I have done a couple of Ethernet cables in the past a few meters long, and they all work. I tested my ultra short straight Ethernet cable connections with a multimeter, and the 8 wires were properly connected, however, when I connected NanoPi NEO to the router with that cable it failed to get a link. Maybe there was aonther issue with the cable, so I made another one just as short… Another fail. It turns out very short Ethernet cables may cause issues, which are normally solved by twister pairs, but with such short cables the length of the twisted pairs is also extremely short, maybe 2 to 3 cm which may not be sufficient. So I ended up using a “normal” 1.5 meter cable, not as neat but it works.

The power strip close to my router was full, and since I did not want to add another, I decided to use the spare USB port on my modem router in order to power NanoPi NEO board. A USB 2.0 port can only deliver 2.5W max, so I was clearly looking for problems here. In order to avoid an issues, I made use of h3consumption script to adjust the behavior of CPU cores and disable unused peripherals.

h3consumption allows us to change the following settings:

So I decided to disable USB, and use two CPU cores at most in order to limit the board’s power consumption, and avoid random reboots:

The changes were properly applied after a reboot.

I powered the board with my modem router, and could use it without issue. I’ll monitor NanoPi NEO’s uptime to check if this works.