Inforce Computing launched 6309 micro single board computer powered by Snapdragon 410 processor, and compatible with 96Boards Dragon 410c board, a little over a year ago. The company has sent a newsletter promoting the launch of cost-down version with long term support equipped with Snapdragon 410E processor, and named Inforce 6309L. 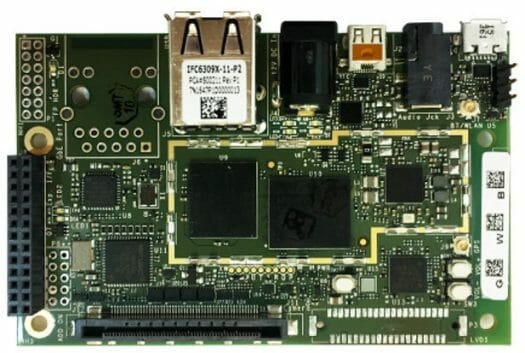 Comparison table between Inforce 6309L board and DragonBoard 410C provided by the company:

Both boards are pretty similar, except Inforce 6901L replaced the HDMI port with a mico HDMI port, and adds a MIPI CSI header. Cost down have been achieved by removing Ethernet, the PoE header, LVDS, and the optional interface for RS-485, as well as offering the SBC with  commercial temperature grade (0 to 70 °C) by default. Some of the specifications not mentioned in the table include the supported voltage range (7-24V DC input), the presence of an RTC, and the signal on the expansion header: 1x I2C, 1x SPI, 1x I2S, 2x UART, and 20x GPIOs.

The board is available now starting at the price of $85 for a minimum order quantity of 100 units. More details can be found on Inforce 6309L product page. Note that while the page indicated the board comes with a “quad-core Snapdragon 410E processor which has a 10-year supply commitment from Qualcomm”, Inforce did not make any explicit commitment for the board.

looks like the single qty Linux boards are backordered at Arrow.

126 bucks, but since I worked on this processor @ Qualcomm Id buy one.

@jim-st
The one at Arrow is the older model with Ethernet, LVDS, wider temperature range, etc…
But if you’d just like one to play with, they are basically the same software wise.

If you go to the product page, you’ll see a promotion for Inforce 6309L board selling for $70 until the end of June.