Android is great to consume content, but is a real pain to create content, as operation like copy/paste and multi-tasking you take for granted in desktop OS like Ubuntu or Windows are not well supported in Android. But Jide Technology saw an opportunity and many users are familiar with Android on their phones and tablets, and some on Android TV boxes, so they created Remix OS, based on Android, but with desktop optimization such as better multi-tasking, multi-window support, improved mouse and keyboard integration and so on. They started with a tablet, and then also worked on ARM based Android TV boxes and laptops, as well as support for x86 computers. The company has now unveiled Remix Singularity which aims to bring Remix OS to smartphones in a similar manner to Windows Continuum or Ubuntu Convergence. 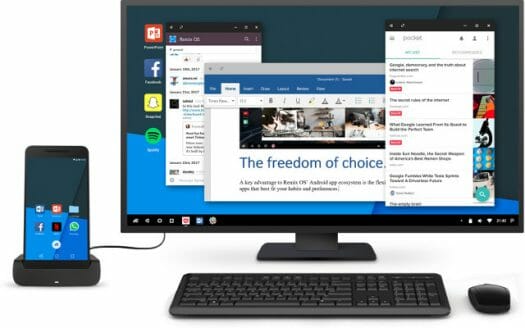 But beside just mobile and desktop (PC) modes, Remix Singularity will also allow to use your smartphone in TV modes, meaning it will be a smartphone on the go, a computer when connected to a monitor, mouse and keyboard, and a media player while connected to your TV. The company also mentions that you can use Remix Singularity on your smartphone with your laptop, but did not provide much other details so far, apart from a short demo video.

Remix Singularity, aka Remix OS for Mobile will become available this summer, likely for a limited number of popular smartphones.