Karl here again for part 2 of my home automation project. We will be looking at how to automate your lights based on time of day and motion. In the first part we setup Home Assistant and uploaded firmware to basic Sonoff Wifi switches. Today we will setup a 433 MHz to MQTT bridge and some sensors.

Depending on your country 433 MHz is an open frequency to use to communicate with. There are hundreds of different types of devices that use 433 MHz to communicate information. We will be focusing on 2 today from Gearbest: WMS07 motion sensor (left) and WDS07 door/window sensor (2 parts, right). 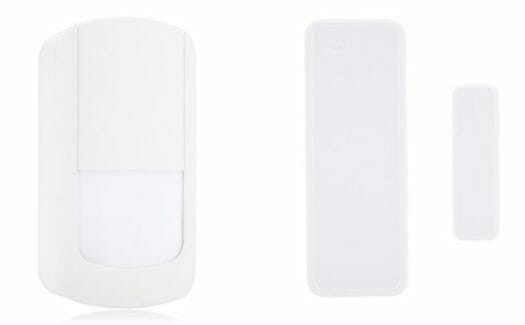 I am not taking the door/window sensor apart, since it is super basic, but I’ve included some photos of the PIR motion detector.

While contemplating how to get presence on a per room basis I ran across this project. It monitors 433 MHz signals and publishes it to the MQTT server. It is a really an easy project. It also has an IR to MQTT feature. I did have an IR receiver and tested it but have not implemented it. He has some good instructions on his page so I won’t go over too much. You can do the bare bones version and just leave off the unused sensors. I also went an extra step and added a light intensity sensor and DHT sensor to the project. It can be found here. I am not going to add those to this write up because trying to keep costs down.

What you will need is 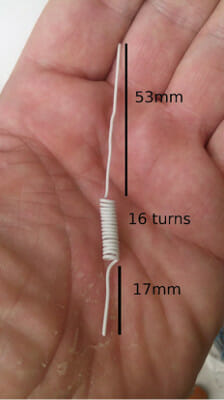 That is all that is needed. For about $10 you have an inexpensive 433 MHz bridge. You can put in a box if you want and hide it in a central location away from interference. I would suggest soldering headers to your board just in case something goes bad. I didn’t at first and made my life a pain. There are a ton of 433 MHz receivers. I purchased all the ones on Gearbest and this is by far the best. I did upgrade to a superheterodyne but I am not sure it is any better. I upgraded because I wanted to put the door sensor on my mailbox and get a notification when the mail was delivered. It is about 200’ away and is a little spotty even with a new 433 MHz receiver. I used this antenna design (see picture on right), as it seemed to work the best

Coverage is the biggest concern.  I have a brick single story ranch style home about 2000 square feet and it covers the inside with ease and a lot of the area around the house. If you have a multi-story house or would need multiple receivers you would need to change the MQTT topics to avoid getting duplicates. Below is the final project. To be honest temperature is really the only thing that is useful to me, but wanted to see what could be done. I purchase the DHT11 and the readings are not good. If you want to do this go with the DHT22. Below is a mostly loaded bridge. I don’t have an infrared transmitter yet. I have a different one coming that does the encoding/decoding on a chip and will follow up when I receive it. I am hoping it will be easier/better than using the Arduino library. 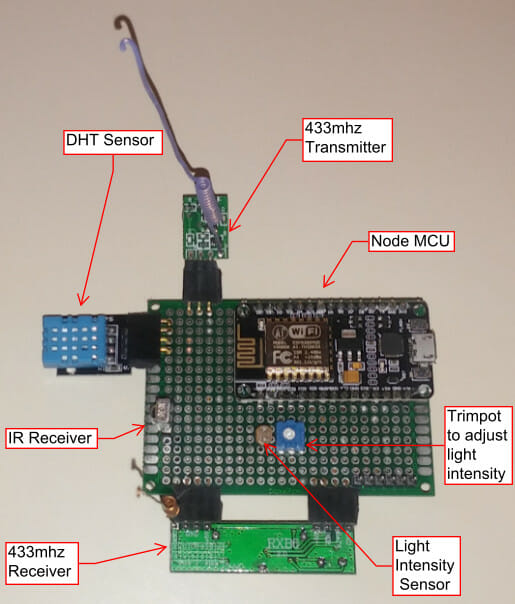 The motion sensor itself is really easy to setup with jumpers. I suggest turning the LED off, and the time to 5 min after finished setting up with the jumpers. If you notice there is a micro switch in the top left of this picture. It is meant to be a tamper switch but I use it as a toggle switch to quickly turn off the lights. The motion sensor is meant to be used for a security system but I just have them sitting on night stands and corner tables. It works really well to override or turn a light on when Home Assistant ignores the motion. A little squeeze of the box and the light will toggle states on or off. 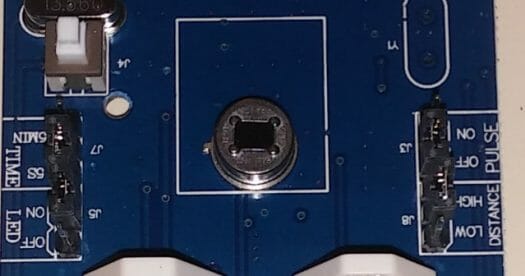 After your bridge is set up and connected take the motion sensor out and put some batteries in it. Run your batch file to see what code is being sent. For this one we need 2: motion and tamper. Write these codes down.

Below is the YAML code that I am using with Home Assistant. I made it find and replace friendly. If you copy and find the 4 items below it should work. I think it is relatively easy to follow. It is the typical timed lamp on motion that is on Home Assistant website with some slight modifications. I had to add the turn off motion script because the motion sensors only sends when it senses motion. I also had to add the tamper toggle switch. When you are adding multiple sensors you can only have one “binary_sensor:” group and one “automation:” group etc.

For the mailbox sensor here is an example. Same thing on this one run the batch file and find the open and closed codes. I have it send me a notification via pushbullet.

We are almost there. Lights are turning on and off magically. Life is good. But there is one situation where it’s not so good. The gloomy day. With the automations above we cannot determine if the blinds are pulled or it is gloomy. We still need the lights to come on under those circumstances to make it really cool. In the next installment we are going to take the motion sensors above and add a light intensity sensor to them. We will be able to do this cheap. We still have a pretty good budget. With the bridge above you open yourself to a bunch of battery operated sensors. You can also control devices, as well, with a transmitter. Any of the transmitters should work on GearBest. You can get the one linked and throw away the receiver. It’s only $1.25.  If you have any questions or concerns feel free to leave a comment.

Hardwarewise I mighly recommend RFLink Gateway for 433MHz (and 315MHz):

Great to get some insights to Home Assistant and also the Sonoffs are great. Personally I would not start a project with 433Mhz nowadays, where dirty cheap alternatives are available. I am currently moving to the Xiaomi system, which uses some kind of zigbee and already works with some home automation gateways (I use openhab2). I chose them based on size (they are really tiny) and price 🙂 I bought them on gearbest sales: motion sensor ~$8.5 (tiny but works amazing, outperforms my other $60 ZWave Sensor in Range and speed), contact sensor ~$6.3, Temp and humidity for ~$12, also… Read more »

By the way, the bridge project isn’t a bad business idea for Kickstarter/Indiegogo: If someone would just steal that concept and make it into cheap enough nicely boxed appliance product that only acted as a “IR and 315/433 MHz to WiFi + MQTT Bridge ” then I think that alone could sell pretty well in some home automation niche markets. “315 MHz /433 MHz and InfraRed to MQTT WiFi Bridge” Reason for that is I really believe there is a commercial market for a such specific “315 MHz /433 MHz and InfraRed to MQTT WiFi Bridge” product because most existing… Read more »

I love all of you. Damn I wish I had a friend this versed to teach me some places to start, etc… I am just mentally inefficient to keep track of things. And to express my elf well. But I still keep reading bits from this great blog.

Great feeback and alternatives. I wasn’t aware of the the Xiaomi solution. Looks like there is some integration with Home assistant. https://community.home-assistant.io/t/beta-xiaomi-gateway-integration/8213. Very cost effective

I was debating on making a wifi sensor box with motion, light intensity, IR, and Temp/humidity. Using a esp8266 as the brains. The only think that concerns me is making it wife approved. I would need a nice looking box.

I do see one advantage to using the motion sensor in the write up. I get 2 boxes in one. I get and motion sensor and push button. Well squeeze button.

Thanks for the link to my article about the antenna (that’s my hand in the pic 🙂 ). Interesting article. I am currently working on an RF433/RF868-LongeRange/IR/-MQTT gateway though it will probably be different from yours. Nevertheless, very interesting article. Will have a thorough read to see if you encountered any pitfalls I should avoid.

@d1dd1 With regard to the starting of a 433 MHz system I think you are right. Currently however I have a system that relies on 433 MHz switches and I am gradually incorporating that into an MQTT driven system. I could replace them all with say a sonoff (have those as well), but as the 433MHz can be easily driven by an ESP8266, might be better to just keep that part of the system.
But yes, should I start fresh, I’d stick to sonoff for every switch

Do you or anyone know of any cheap ZigBee USB dongles that works with PC (Windows and Linux) and supports four most common ZigBee 2006 and 2007 protocol specification stacks that are Smart Energy, Home Automation, ZigBee Light Link, as well as ZigBee PRO?

I would like to test it with different Xiaomi sensors and the new Ikea Tradfri (Trådfri) smart lightbulb series.

d1dd1 : Great to get some insights to Home Assistant and also the Sonoffs are great. Personally I would not start a project with 433Mhz nowadays, where dirty cheap alternatives are available. I am currently moving to the Xiaomi system, which uses some kind of zigbee and already works with some home automation gateways (I use openhab2). I chose them based on size (they are really tiny) and price I bought them on gearbest sales: motion sensor ~$8.5 (tiny but works amazing, outperforms my other $60 ZWave Sensor in Range and speed), contact sensor ~$6.3, Temp and humidity for ~$12,… Read more »

@Lúcio Corrêa
You can get them from all popular China suppliers, just search “Xiaomi Mi Smart Home”.

You can get them cheap from Aliexpress, eBay, Gearbest, Geecr, DX.com, and more.

Make sure that you get the “Version 2” (Ver 2) which is second-generation version.