Beelink has launched an update to their Beelink BT7 Cherry Trail mini PC with Beelink AP42 using a similar mechanical design, but upgrading the processor to an Intel Pentium N4200 coupled with 4GB DDR3 memory, and a 64GB eMMC flash. Like the previous model it can be mounted behind a VESA compatible monitor or TV, and can also be upgraded with your own M.2 SSD. 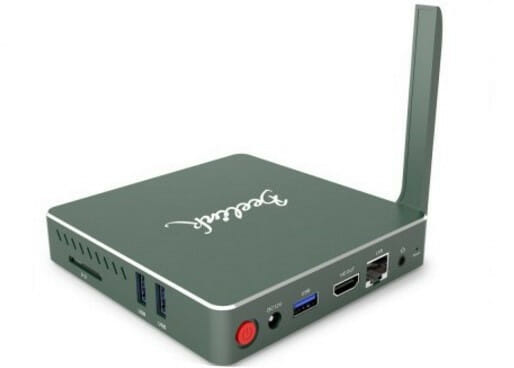 The current product page mentions that both Windows 10 and are supported [Update: Linux is not supported, see comments section] . The mini PC will ship with a power adapter, and an user manual in English. Based on the pictures on GearBest, the VESA mount and fixtures should also be included, and looks to be the same as the one coming with Beelink BT7. 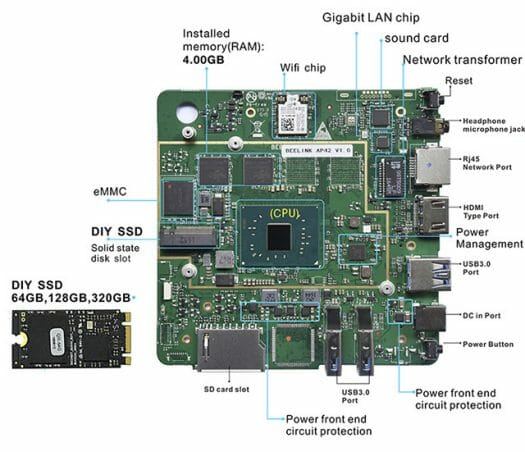 I’ve reviewed Beelink BT7 mini PC last year, and found that it would throttle from time to time, and while I found the fan to be quiet, some people commented that it was noisy. Beelink AP42 should also have a fan, but hopefully the company has done some work to improve thermal design, and fan noise.

Beelink AP42 is sold on GearBest for $210.47 including shipping with EU, UK, or US plug, and pre-loaded with Windows 10 [Update: GBAP42 coupon brings the price down to $179.99]. Delivery is scheduled for March 7 to 15, so you’d have to wait a few days to get it shipped. I could not find a Linux version, and maybe there’s none, you may just have to install your preferred distributions yourself.

Too bad it is not fanless.
Well, waiting for another Apollo Lake device to hit the market then (Mele, ECS Liva Z, …).

fanless and hdmi 2.0 would seal the deal for me.

My deal breaker is that only Gearbest has it in stock. I already have a TV box and I ordered a replacement for my oDroid XU4 to use as a NAS. Even with M.2 port and SATA port (an internal HDD still needs power from an external source) it does not appeal to me. But this is just me.

GearBest told me they updated their page. I can see at least two interesting parts:
1. A new picture shows a large heatsink without fan. So it could be fanless.
2. While HDMI 1.4 is still shown, max resolution is shown to be 4K @ 60 Hz

I’ve asked clarifications for both points, and waiting for an answer.
They also gave me a coupon: GBAP42 179.99$

it’s fanless. and we comfirmed with the supplier, he told us the HDMI is 1.4p, but they have been test that it was support 4K @ 60 Hz.

The second point is not correct (HDMI 1.4p?), I guess they mean HDMI 1.4b, in which case 4K @ 60 Hz is not possible. Reviews will make clear what is really supported.

Note: Linux is not working on Beelink AP42 with the current BIOS.

Note 2, and they don’t have any intentions to support Linux:

I hope my email finds you well.
Sorry for that we don’t allow the right of Linux now.
If you need to customize Linux, please contact with our sales departments. Also we need R&D to develop this rights.
Sincerely,

cnxsoft : Note 2, and they don’t have any intentions to support Linux: I hope my email finds you well. Sorry for that we don’t allow the right of Linux now. If you need to customize Linux, please contact with our sales departments. Also we need R&D to develop this rights. Sincerely, How did they manage to prevent Linux from working ? Did they finally apply the original intent of secure boot which was to sell windows-only hardware ? If vendors start to lock down their platforms, we’ll probably need to establish a public list of useless products never to… Read more »

@Willy
Finally, somebody managed to make it work (not sure how yet, but I’ve been told by email). The results will be posted in a post in CNX Software soon.