Canonical wants you to run Ubuntu apps (snaps) for everything and on all types of devices, not only on your computer or smartphone. For example, base station apps (4G LTE, Bluetooth, LoRa…) will soon be able to run on LimeSDR board, the company is pushing for branded app stores, like the one for Orange Pi Boards, and now they have introduced the concept of App Logic Controllers (ALC) which are PLC devices running apps, thus bringing the concept of apps to the industrial world. Bosch Rexroth demonstrated the solution at Embedded World 2017 on their IndraControl XM22 PLC running Ubuntu Core. 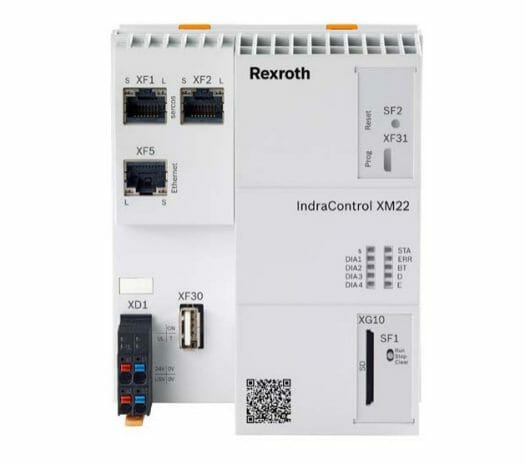 Let’s have a look at the hardware first with IndraControl XM22 specifications:

Normally, you’d connection a few IO boxes to the PLC, and run the software. The video below shows IndraControl XM22 in action with Ubuntu.

It’s pretty with all the LEDs blinking, but I could not find the exact details about the setup. Nevertheless one of the goals of apps to to reduce the cost of hardware and software, as it should work on any device that runs Ubuntu Core with the right interfaces, including Kunbus Revolution Pi industrial computer based on Raspberry Pi.

Snaps are supposed to be easy to install and use, and Induscover is no exception:

Those two commands will install induscover, discover attached devices, and publish discover/plc/out MQTT topic with the information. The github link to Induscover above also explain how to use Node-RED to manage and control the devices.

Thanks to Jian for the tip.

Here is some more information on the setup:
https://www.boschrexroth.com/dcc/Vornavigation/Vornavi.cfm?Language=EN&Variant=internet&VHist=g97568,g315480&PageID=p923658

Disclaimer: I did the linux porting.

@Jian
I see why it was “worth covering” then :). Thanks for clarification about the processor and the link with more software information. I struggled to find clear pictures about the PLC, but finally managed.

@Jean-Luc Aufranc (CNXSoft)
I must plead the Fifth 🙂 Thanks for write up this in no time.

“base station apps (LTE, 4G, LoRa…) can now run on LimeSDR board”

You can’t yet actually do any of that.

@JM
Oh.. maybe I jumped the gun here.
But I can see that LimeMicro announced an app store last year (June 2016) @ http://www.limemicro.com/press-releases/ubuntu-app-store-announced-limesdr-developed-applications/ mentioning:

Developers are already using the LimeSDR to develop apps with LTE, Bluetooth and LoRa, and future applications including IoT Gateway, 2G to 5G cellular Network in a box, drone command and control, utility meters, home automation and media streaming are anticipated by the team behind the LimeSDR.

Do you mean while there are demos out there, it’s not really ready for prime time?

@Jean-Luc Aufranc (CNXSoft) They do have a few snaps, the same since October: https://myriadrf.org/blog/snap-packages-limesdr/ which haven’t been updates since. None of those will do any of the features you said. Some of that functionality (LTE, LoRa development is way behind and seems to have stopped) is available through open source packages but via the usual methods (websites, github) There was some discussion about snaps on the LimeSDR forum – https://discourse.myriadrf.org/t/initial-hackish-gqrx-snap/966/7 -just a few days ago and the opinions varied from (“I forgot about them” to “What’s the benefit anyway”) I think snap system is still too confusing for non-technical inclined… Read more »

@JM
Some progress on the app store(s) for LimeSDR @ https://www.crowdsupply.com/lime-micro/limesdr/updates/ubuntu-app-store-progress