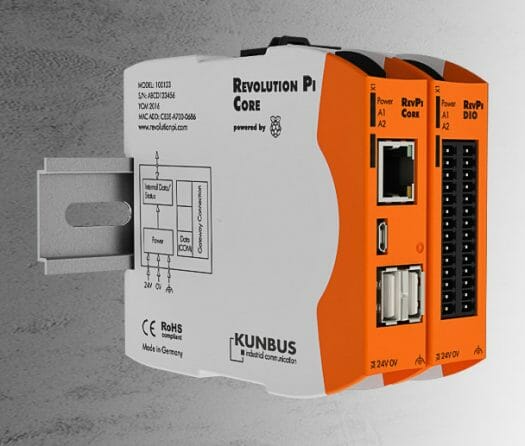 The system runs Raspian Wheezy with RT-patch for Linux kernel 4.1.13. 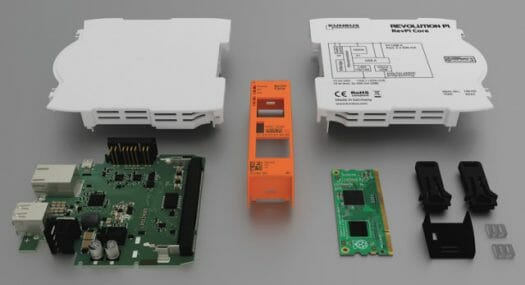 You can find the full details on Kunbus RevolutionPi microsite, and purchase RevolutionPi RevPi Core (169 Euros), DIO modules and gateways on their webstore.

Thanks to Sander for the tip.

Raspberry BCM2835 chip is available to all , thought they exclusively make only for the raspberry foundation

@varghese
Available to all? I’m not sure. Kunbus did not use BCM2835 directly on their custom board, but instead they used Raspberry Pi Compute Module sold by Raspberry Pi Trading.

Hmmm…all the fieldbus modules are slaves, not masters, but they do have a good selection, including Profibus IRT and Ethernet Powerlink. Pricing is reasonable for industrial, but only allowing 2 expansions is very limiting.

Other than using a RPI, what benefit is there over prevous means?

@TonyT Depending on the Ethernet chip on the main board they could run “software” fieldbus masters on the “core” module. All they need is RT kernel and efficient ethernet driver. LOGI.CAD3 (the PLC solution that they use) have some references to acontis EtherCAT master so is seems probable. In fact they only need one fieldbus slave in given machine and one or more IO modules. They have RS485 on the interconnection bus so it could accept multiple “slower” modules. I am quite interested which company provides the fieldbus slave solutions – I suspect they rely on some proven name in… Read more »

A BeagleBone version would be far more useful

@JM
Yes indeed. Ethercat slave could be implemented using the PRUs of the Sitarta.

Somewhat related. Somebody has implemented Modbus slave on ESP8266 -> http://pdacontrolen.com/update-esp8266-industrial-modbus-tcp-ip/

Very interesting bit about how heat relates to CPU core count too CNX, in my humble opinion ” The resulting fan-less design cools by convection through vent holes and all four cores can run at full speed at ambient temperatures under 20°C. Above this, the Broadcom BCM2837 processing chip has automatic clock throttling. Tested ambient temperature figures with 100% processing are: 20°C 4 cores 1.2GHz 25°C 3 cores 1.2GHz, 1 core 1.1GHz 40°C 4 cores 1GHz (or at least 1 core 1.2GHz) 50°C 4 cores averaging 700MHz (or at least 1 core 1.2GHz) 65°C either 4 or 1 core in… Read more »