Archermind launched Mediatek X20 board powered by Mediatek Helio X20 deca-core processor, and compliant with 96Boards CE hardware specifications last year for $199. The company has now been working on a “professional” version, dubbed Mediatek X20 Pro that adds supports for 3G and 4G / LTE, as well as extra I/O connectors for cameras, LCD modules, and an RF baseboard. 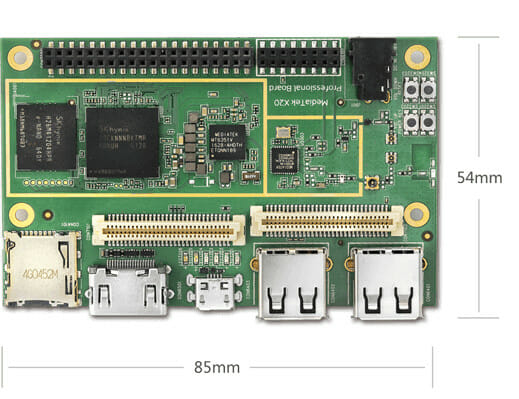 The board only supports Android 6.0, with Linux support depending on what Mediatek decides to do. You’ll find some hardware and software document on the Wiki which still has many non-working links…, and none of them seem related to the Pro version yet. 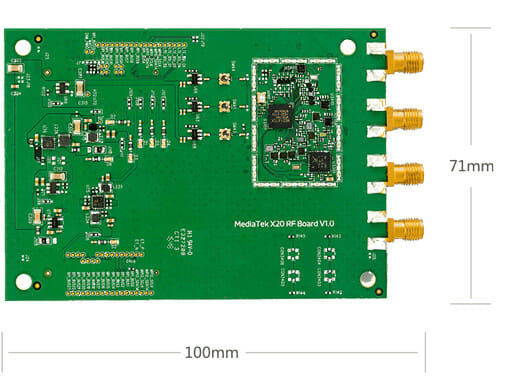 If you want to use 3G or 4G cellular , you’ll need to get  “Mediatek X20 RF sub-board” that connects to X20 board via two board-to-board connectors with the following key features:

Charbax interviewed the company at Linaro Connect Budapest 2017 where they showcased their new X20 Pro board and corresponding add-on boards, as well as the upcoming Mstar Altra board compliant with 96Boards TV Platforms specs (7:48 mark in video) based on Mstar MSD6A838 quad-core ARM Cortex-A53 SoC with 4K M-Genuine Video Engine supporting Motion Estimation/Motion Compensation (MEMC), HDR, color enhance, de-noise, and so on.

It’s unclear whether Mediatek X20 Pro is available now, and we don’t know the price yet, but considering the non-pro version sells for $200, we could probably expect the 4G version to sell between $250 to $300 with the RF baseboard and SIM card adapter board. Some more information is available on the product page.

Also no USB 3.0 and no ethernet at all, not to mention Gigabit ethernet. It is basically the SoC from a phone that you can use to just launch Android. I do not see any advantages here over existing products.