Intel launched their first Optane SSD based on 3D Xpoint technology for the enterprise/datacenter market last week, and now the company has announced 16GB and 32GB consumer grade Optane memory will start selling in April starting at $44. 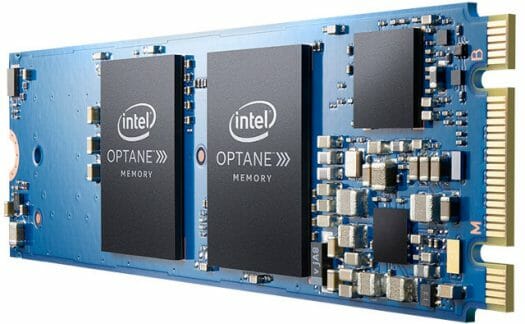 We can see some of the specs for both cards on Intel website. I reproduced some of the performance reliability data in the table below.

The read sequential performance looks good, but the write performance is lower than one some of cheap mini PCs I’ve reviewed in the last year. For example the 128GB FORESEE SSD inside Voyo V3 mini PC gets respectively 400 MB/s and 200 MB/s sequential read and write speed in actual benchmarks. What make Optane memories stands out are random read and write performance, as well as ultra-low latency, which explains why Intel promotes system boot time and app loading times. For example, Microsoft Outlook will launch up to nearly 6x faster, and the Chrome browser up to 5x faster. 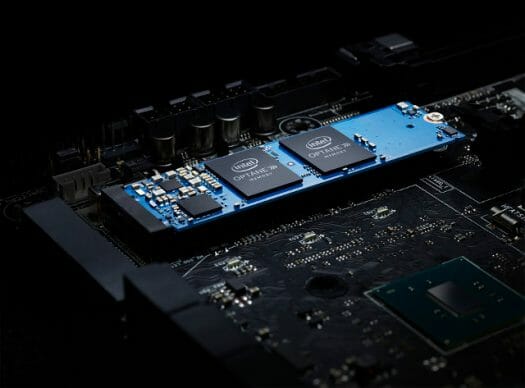 I’m not too familiar with endurance data, and it’s really odd MTBF is expressed without unit, but if we look at an Intel 30GB consumer mSATA SSD for comparison, MTBF is expressed in hours (1.2 millions), so I guess that means the Optane memory MTBF is 1.6 millions hours, and the UBER number is less than 1 sector per 10^16 bits read, so endurance numbers are mixed, and there does not seem to be any clear advantage for the Optane memory in that respect. Power consumption of Optane memory is also much higher than the mSATA SSD I linked to (Idle: 250 mW; active: 300mW).

These are intended to be a type of cache to be used with a regular HDD. Read the Intel doc for all the details.

I see something that I feel wrong in your calculations. 800000 times is not the result of writing a whole 512GB entirely to reach 400TB of data, it’s else 800 times or else 400PB. The same goes for the Intel thingie.

And I should note that for the average user, write latency is going to have more of an impact on perceived performance than write throughput. Your average office/home probably doesn’t write 290MB of data on any given day, much less in a second.

sandbender : Your average office/home probably doesn’t write 290MB of data on any given day, much less in a second. Don’t underestimate stupid concepts called ‘web browsing’ or ‘social media’! 😉 A simple web search for eg. ‘firefox hammering hdd’ outlines the problem that’s not limited to Mozilla’s browser: +10GB written per day aren’t unusual. Had to analyze recently for a client why the CEO’s laptop behaved slowly. DTrace/iosnoop helped blaming a Twitter and Whatsapp client constantly hammering the disk. And instead of fighting stupidity and fixing stuff we throw hardware at it (those Optane SSDs looking sufficient for that,… Read more »

Don’t under estimate the amount of writing that a PC running Windows does in the background while doing nothing. It can be GBs/day!

The Linux kernel community seems actively researching the possibility of using NVRAM as system memory. Intel has developed the hardware interface (NVME), HP is developing a huge-memory system (hp the machine), and Kernel community is working on 5 level memory mapping, fast swap memory and others. Honestly I don’t quite understand the use case of such NVME-backed huge memory system. Right now you can get at least 16GBx4 per NUMA node easily and NVME RAM is clearly targeting several TB per CPU core. Also I don’t think low write performance is a big deal since writes can be easily buffered… Read more »

Also, even the 32 GB model seems insufficient as a stand alone drive, so probably bcache/bcacheFS?
Also its really strange that this product requires 7th processor? Why?

Don’t know the details but these sit on the PCI bus so perhaps there’s some architectural ehancenent in latest CPU/chipset to optimize the HDD caching functionality.

dx :
Also its really strange that this product requires 7th processor? Why?

@dx
They telling us to wait for alternative.
http://www.pcworld.com/article/3185264/storage/micron-to-ship-intel-optane-competitor-later-this-year.html

Could someone describe where is Wow in this release? Today we already have Samsung NVMe SSD with 100$ for 128gb module. And they are faster than described Intel, bigger, cheaper and sold for one year.

KiLLWarez :
Could someone describe where is Wow in this release?

There is no Wow from a consumer perspective since consumers compare numbers without meaning focusing on mostly irrelevant sequential throughput in MB/s, IOPS numbers without caring at which queue depth ‘measured’ and ignoring latency at all 🙂

@Mike Schinkel This thing on SBC? Ping me please if you find a SBC featuring ‘a 7th Gen Intel Core processor, an Intel 200 series chipset, an M.2 type 2280-S1-B-M connector on a PCH Remapped PCIe Controller and Lanes in a x2 or x4 configuration with B-M keys that meet NVMe Spec 1.1, System BIOS that supports the Intel Rapid Storage Technology (Intel RST) 15.5 or later driver and Windows 10 64bit or above installed on a supported SATA-based storage device’ 😉 This is not a replacement for consumer or data center storage but acts as something in between slow… Read more »