Last year, Octavo Systems introduced OSD3358 System-in-Package (SiP) that includes Texas Instruments Sitara AM3358 processor, 256MB to 1GB RAM, a PMIC and an LDO into a single package. Since then the SiP has been found in BeagleBone Black Wireless and BeagleBone Blue, and at the time of launch there was also some development around PocketBone, a tiny open source hardware Smalls mint tin sized board based on OSD3358, which is smaller than a CHIP board, but a little bigger than NanoPi NEO board.

There’s now been some progress with prototypes of the board manufactured with the following specifications:

The first version of the board was designed with Eagle, but the schematics and PCB layout have been redesigned with KiCad open source software instead, and all hardware design files are released under CERN Open Hardware License v1.2. The boards should be able to run any distributions that works on BeagleBone Black derived boards such as Debian, Angstrom, Ubuntu, etc… 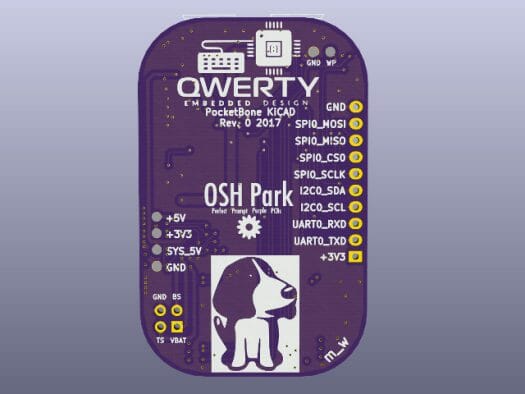 PocketBone is not for sale yet, but if you are interested you could fill out a survey, which could either end-up starting a group buy, or – if there is more interest than expected – a crowdfunding campaign. More details about the project can be found on its hackaday.io page.

@boudyka
I think nothing, the pictures was likely taken on top of his book.

@Jean-Luc Aufranc (CNXSoft)
still nice for someone to highlight it. BTW I’ve noted there is NeTV2 lurking in the wings. That said……ironically…..If it wasn’t for Bunny Huang and the NeTV I might not have found this wonderful blog 6 years ago…time flies

@boudyka
I went looking up Bunny Huang and the NeTV and found this,