Hardkernel is doing a good job at providing working images with GPU / VPU support, and documentation for their ODROID boards. But while Exynos based ODROID-XU4(Q) boards already get firmware images with a recent Linux 4.9 kernel, Amlogic S905 based ODROID-C2 board’s Ubuntu 16.04 images still rely on the Linux 3.14 kernel released by Amlogic, plus various patchsets. 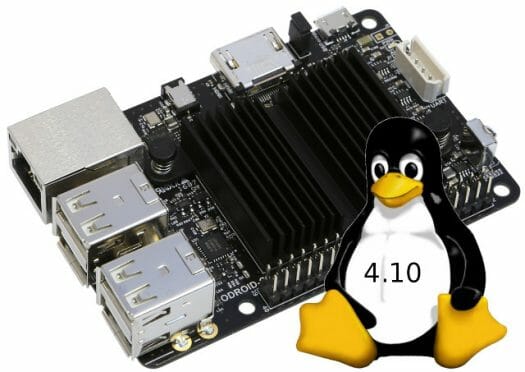 But we’ve seen BayLibre is working on a Linux mainline port for Amlogic processors, and Armbian community appears to have leveraged that work, and added Ubuntu 16.04 Server and Desktop images with Linux 4.10 to their build system. Those are experimental nightly builds so they may not have been tested, and it’s likely not working as well as the Ubuntu 16.04 “legacy” images released by Hardkernel. They are also not shown in Armbian ODROID-C2 page at the time of writing, but it’s a step in the right direction.

What about Armbian for NanoPi K2 with same SoC?

@Aleksey Belskiy
Nothing yet, but I’d assume it’s just a matter of changing the DTB file. WiFi + Bluetooth support might be an issue for that board right now.

@Aleksey Belskiy Adjust device tree stuff and you’re done. All S905 devices out there are more or less the same (true for any other Android SoC too of course). Some folks already managed to get Armbian with legacy kernel running on K2: https://forum.armbian.com/index.php?/topic/4150-friendlyelec-nanopi-k2-s905/&page=2#comment-31195 So it’s really just checking what’s different in mainline .dts and adopt the necessary diffs between ODROID-C2 legacy .dts and K2 .dts for mainline. But since FriendlyELEC just recently started to support mainline kernel on their own (with Allwinner H3 and H5) I really hope they do this job for their K2 too and also start to… Read more »

is there any rumors for s912 linux board?