At the end of 2015, Samsung unveiled their S3FBP5A Bio-Processor comprised of an ARM Cortex-M4 MCU, a DSP, and sensors for PPG, ECG (electrocardiography), Skin temperature, BIA, and GSR to have a single package to design tracker able to monitor your health condition. The company demonstrated an early prototype called S-Patch at CES 2016 (See embedded video at the end of this post), and now S-Patch3 wearable health monitoring system has just hit the FCC. 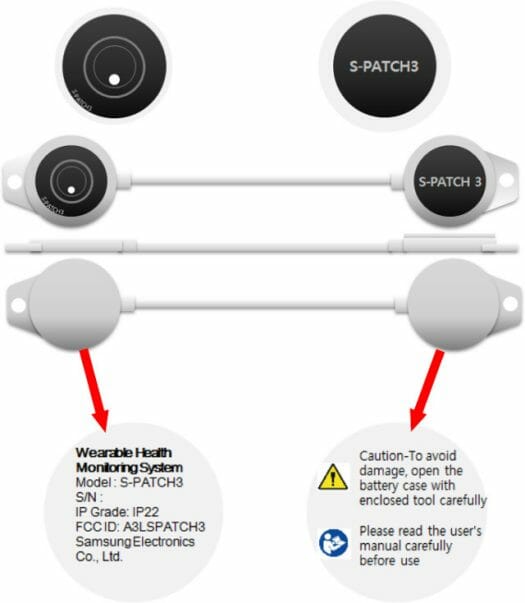 The system has two round shapes case connected via a cable, with one for the battery compartment, and the other containing the Bio Processors, and meant to be placed on your chest. The device can then synchronize the data with your smartphone in real-time over Bluetooth. People with heart conditions may benefit from the system, as if they wish to do so, they could share the data with their doctor. Few documents are publicly available on the FCC website, and while we don’t know the expect launch date of the device itself, the user’s manual and photos will be released on December 3rd, 2017 on the FCC website, which should roughly correspond to the launch date, or at least the official announcement date from Samsung.