I’ve often read praises about HiMedia TV boxes in the comments section of this blog, but so far, I had never tested any of their products. This is about to change, since the company has sent me their latest HiMedia Q30 TV box running Android 7.0 on Hisilicon Hi3798MV200 processor, a cost-down version of Hi3798CV200 processor with the same CPU,a lower-end Mali-T450 GPU, about the same media capabilities, and less I/Os. I’ll start the review by checking out the TV box and accessories, as well as the PCBA, before reporting the experience with Android 7.0 firmware in several weeks.

I received the device is a package that read “HIMEDIA Q30” and “Android TV Box”, and shows some of the key features like 4K @ 60 fps, 10-bit HEVC, HDR and Kodi support.

The” Quick Guide” is quite basic, but contrary to most competitors, it’s actually useful with a description of the remote control and how to configure the TV keys with the IR learning function, QR code for the Hishare and Hicontrol mobile apps…

.. a connection guide depending on your setup, some basic configuration for network and UI, and the different ways to do a firmware update.

The box itself is made of an outer shell made of metal, and the body inside include the front and rear panels is made of plastic.

The front panel includes the power button and two LEDs, as well as the IR receiver window, while one of the side features a USB 2.0 port and SD card, and the other side one USB 3.0 port, and another USB 2.0 ports. The rear panel comes with an external WiFi antenna, optical S/PDIF output, RCA connectors for composite video and stereo audio, an HDMI 2.0 port, a Fast Ethernet port, the recovery pinhole, and the power jack.

Usually, we’d open the TV boxes by loosening some screws on the bottom of the case, but there aren’t any in Q30. As a side note, the MAC address starts with 00:66:DF which does not look up to anything. 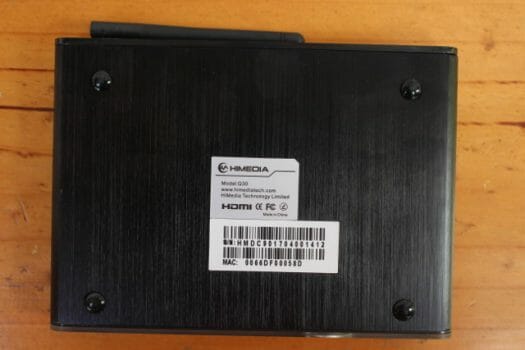 The processor and memory (2GB RAM) are covered by a thin black heatsink. An 8GB Samsung KLM8G1WEPG-B031 eMMC 5.0 flash is used for storage with the following performance according to Samsung eMMC flash table: 140 MB/s sequential read speed, 8MB/s sequential write speed, 5K/0.6K R/W IOPS. That’s the cheapest eMMC flash, and the one with the weakest performance, from Samsung in the table. The Ethernet PHY is built inside the Hisilicon processor, so there’s only a KMS-1102NL transformer for 10/100M Ethernet, while 802.11 b/g/n WiFi is implemented through a Realtek RTL8188ETV module. Other ICs include Genesys GL850G USB 2.0 hub, and 3PEAK TPF632A stereo line driver. The serial console should be available via a 4-pin header located between a LED and the Samsung flash, and there apepars to be footprint for another S/PDIF port and 3.5mm YPbPr  (video component) jack. 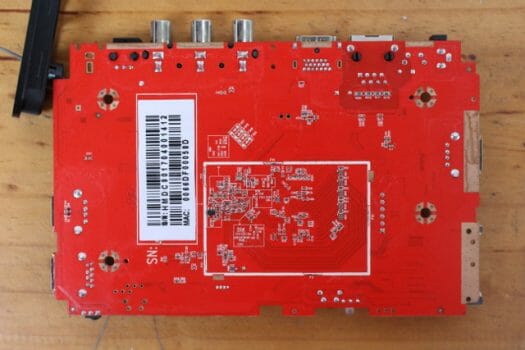 There’s no much to see on the other side of the board.

I’d like to thank HiMedia for sending the review sample. The TV box does not appear to be available for retail just yet, and the company has not listed it in their website either, but by the time time I complete the second part of the review, HiMedia Q30 should be available for sale.

[Update: Himedia Q30 is now selling for $99.99 including shipping on GeekBuying

Enough with the unboxings ! Me wants the full review of the Vorke Z3 !!

@Peter
The model I received comes with 2GB, although I know that in my first post about HiMedia Q30, I wrote 1GB RAM only, because that was what was written in Alibaba, and still has. I wonder if they may have two models with 1GB or 2GB RAM. I’ll ask and update the specs accordingly in the first post.

@obarthelemy Yeah… A lot of unboxing, but I’m now trying to refuse new samples until early August, since I’ll be busy until mid August with the current devices I have. Unboxing posts only take 2 to 3 hours, not that much more than the time I’d normally take to research products and writing a blog post. So I do it as soon as I receive a sample. Reviews take 8 to 16 hours (or more), and I do the testing at week-ends, so one device per week provided I don’t get into troubles with a device, or life calls me… Read more »

@Jean-Luc Aufranc (CNXSoft)
So there was a mistake on Alibaba. HiMedia Q30 sells with 2GB RAM. and there’s no 1GB version.
The retail price will be $149.

Again a box from Himedia with no bluetooth?

Providing that basic function surely could not have cost too much.