Mecool BB2 Pro is yet another Amlogic S912 Android 6.0 TV box, but after Eweat R9 Plus, it’s my second TV box with DDR4 memory that should deliver much higher bandwidth compared to DDR3 memory used in most TV boxes. But so far, it’s clear how much performance can be extracted from the system with higher memory bandwidth in actual use,  and that’s exactly what I hope to find out in the second part of the review, but in this post I start by going through the specs, check the box and its accessories, as well as the hardware design.

Videostrong sent the package to me as Mecool is one of the brands together with YokaTV, and they are also found in some OEM products like Vontar. 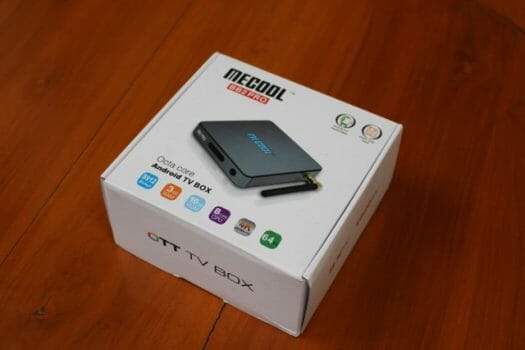 The device itself looks pretty similar since it’s based on the exact same case as YokaTV KB2 we’ve just reviewed, and all ports are the same including the front panel’s IR receiver and LED window and power button, two USB 2.0 ports and a micro SD slot on the side, and the rest on the rear panel: Gigabit Ethernet, optical S/PDIF, AV port, recovery pinhole, HDMI 2.0a output, and the power jack. There’s also an external Wifi antenna.

D0:76:58 MAC addresses used by Videostrong still do not look up to anything. [Update: The company told me that “The MAC we’re using is not IEEE MAC. It works in localized network, and it is the only id for empowering applications to activate, specially IPTV applications.”] Anyway, I had to remove the four rubber pads in the metallic bottom cover, and loosen the screws underneath in order to open the device. 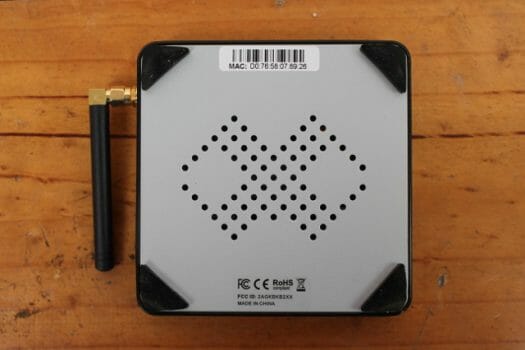 We’ll find two Samsung K4A8G165WB-BCRC DDR4 SDRAM chip (8Gbit each) so we’ve not been lied too, and the device indeed has DDR4 memory :), as well as the marking (3.3V, Tx, Rx, GND) for the serial console on the bottom of the board.

We’ll need to use a small plastic tool to pull out the board from the plastic case. A heatsink – plus two thermal pads – covers Amlogic S912 processor and the remaining DDR4 chips, and a LED is connected to the bottom of the case. You’ll also notice an elliptic opening (unused) on the top right of the plastic, that’s probably reserved for a power button in other designs.

I’d like to thank VideoStrong for sending the review sample, and interested distributors may inquire the company via the product page. Mecool BB2 Pro can also be purchased for $68 and up on Banggood, GearBest, and eBay, or just about the same as YokaTV KB2 with 3GB DDR3 instead of 3GB DDR4, and 32GB storage instead of just 16 GB, with the rest of the specifications being equal.

@GanjaBear
I can see one has 16GB storage, the other 32GB.

i’ve ordered the basic BB2 2GB DDR3 if you can manage to boot linux on your pro box, i’d be interested to see some raw benchmarks, for example some openssl cipher crunching, for example a simple : openssl speed -elapsed -evp bf-cbc aes-128-cbc aes-256-cbc my search is for the fastest “cheap” arm core for high speed vpn links, and so far my best results are with s905. The first s912 results i got were actually lower but it’s probably because of the early software running on it. I don’t expect s912 to be faster than s905 in a single core… Read more »

Right, thanks for checking this out @Jean-Luc Aufranc (CNXSoft)! However, I’ve just pored over some specs, and, is it plausible “Support 5.1 Surround Sound Output” is missing from the cheaper one? (both lack SPDIF)

@GanjaBear
5.1 audio pass-through is mostly a software thing once you get HDMI working.

One possibility is that one could have Dolby & DTS Licenses, but VideoStrong told me they did not apply for me a while ago, and the devices would be promoted accordingly S912-H vs S912.

Are you going to do a part 2 of the review? Thank you

@Jean-Luc Aufranc (CNXSoft)
where did u find stock firmware?

@deniro
Videostrong sent me an email.

Anyone doubting this ROM is different then for the BB2 with 2GB DDR3?
I would like to try this one since it’s newer than my ROM…
Anyone tried to install on BB2?

What is that white pad with the yellow red black wires, what does it do and how does it work, can you fit a 3 pin laptop fan in place of it.?

@Mark
That’s an LED to lit up to Mecool sign while the box is running. If you disconnect it the box will still be running. I’m not sure about connecting a fan there. It depends on the fan voltage, and also the current drawn by the fan.

Ok thank you, I thought it was the thermal pad mentioned, I was curious on why it would have wires and how they worked. Anyhow, the fan I have is 5v 0-20A, I’m not worried about that though, you’ll probably need a hack though, to control the speed of it, I wouldn’t want it on all the time. Anyways I just got mine today, I’ll see how well it works

Hello, I have problems with my Mecool BB2 Pro. – First when I turn on the device, I connect to my WiFi network and try update the software – the software is with last version OTA version: 91209002 – Second time: I can not connect to my network – WiFi and I do not know why. I connect my laptop, smartphone….but the TV box – no. – A lot of bugs – when I try to search some file in outer hard drive (1TB) the device stop. Is it possible to give me some advice what I have to do?… Read more »

@Stenly
Have you spoken to the seller you bought it from?

Does it have a warranty still?

You could either do a software reset, then reboot and once reboot back up, turn off, wait 2 minutes then restart and set up Wifi again?

Are you using the offical power supply?

Yes, I send the claim to Gearbest. I have the box from 1 week.

Yes, I made software reset. Now I have network, but again a lot of bugs. Can not find the hard drive, Kodi is not working, etc.

Yes, I use the original power supply.

Do you know the producer of the box. I want to contact them directly.

Version of Kodi are you running? Have you checked Kodi version is a stable version and not a released candidate?

What is the size of your hardrive?

I think that need to pre-install the software, but unfortunately I can not find.

All applications do not work properly…

Well after a brute forced web based translation of another language seems Gearbests answer was this TV box supports 2T hardrive. If you trust Gearbest customer feedback, one customers says has a 4T drive working! I have no idea who owns this brand for these boxes. Maybe someone else does. I am running Kodi 17 on my S912 Alfawise s92 with no problems but addons did need updating for Kodi to work When I got it. But I use the the app guru’s, Google Play app, Complete Kodi Setup Wizard for my Kodi setup up. Even CEMC works but needs… Read more »

See if reading this helps ( yes it talks phones but TV boxes which are not Android TV based, run phone based roms )

@Stenly
Your problem with the device stopping is probably because of the power supply. 5V/2A is quite low, try to find another 5V/2.5A or 5V/3A power supply.

If your device crashed, and you cannot access the HDD anymore, then you may have to run a scandisk in Windows. It may have caused problems with Kodi too. Try to clear the cache.

Alternatively, you could try to install SPMC, like Kodi but with some optimizations for Amlogic platforms.

I have a problem with keyboards mouse combo, they worked the first time, but now only the trackpad works, the keys do not work, this is the same for both Logitech and Microsoft media keyboard, I have done factory reset and still does not work. Help plz

@Mark
Have a look into Android Input settings, and to try enable hardware keyboard by default.

I’ve fixed it, I downloaded keylayout file (generic.kl),i messed it up somehow,i was trying to modify enter button ,it wouldnt work in apps like searching youtube or chrome.I fixed that as well.

I’m guessing factory reset on this device doesn’t reinstall the OS ,since it did not replace that system file i modified .Im guessing it only deletes your data and personal settings.

Is this the rooted firmware version?

My mecool box WiFi can’t turn on,does it have a airplane mode switch?

@mark mamizuka
No problem with WiFi here. Do you mean if you try to enable WiFi it will switch back to disable automatically after a few seconds?
Are you doing this in the Android settings (white background) or the Amlogic settings (dark grey background)?