Motorola once launched the Lapdock, a device that looks like a laptop with a 11.6″ screen and a keyboard, but without processor or memory since it was instead designed to connect to the company’s Atrix 4G smartphone. Motorola eventually pulled the plug on this concept, and maybe it was just ahead of its time, as a startup has now developed NexDock, a device similar to Lapdock with a 14″ display, built-in battery and Bluetooth keyboard. 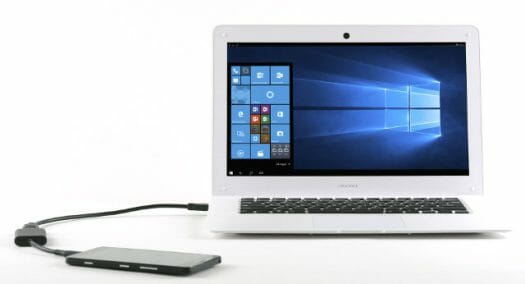 NexDock is operating system agnostic and would work with Windows 10 with Continuum feature, Linux distributions, Android smartphones and tablets, iPhones, and iPad. It’s also convenient to use with small development boards such as Raspberry Pi, and TV sticks. Another use case is for a secondary display for your laptop.

Beyond the current NexDock design, the company envisions further products where CPU modules would just connect to the back of display via a USB Type C connector carrying both USB data, video and power.

NexDock has been launched on Indiegogo, where the company aims to raise at least $300,000. All $79 early bird rewards are gone, but NexDock “Not Too Late” rewards can be had for $99 for the next 750 pieces, after which it will go for $119. Retail price is expected to be $149. Be careful that shipping is not included, and while you won’t be asked for it when your pledge on Indiegogo, you’ll be asked around $25 extra, with the exact amount depending on your country, once the campaign is complete. Delivery is scheduled for June 2016. You can also visit NexDock website for more details.

I think this is great but not at that resolution.

I guess, we all have our perfect ideas. E.g. mine would be 12″ or 13″ with small bezels, IPS 1080p panel. Basically make it more compact and add a better display.

I still have a Motorola lapdock and I often use it for demos. Couple of weeks ago, during FOSDEM 2016, I showed a DIY laptop with it and Tizen. So many people were asking me about the lapdock.
NexDock looks nice. In my opinion it is a bit overpriced because right now NexDock is more expensive than the Motorala lapdock that I bought 3 years ago. The hardware is similar so I don’t see any innovation. The fixed goal of $300,000 also sets a high bar for the project.

I was excited about this concept years ago, but I suspect it will always be niche.
http://www.amazon.com/gp/aw/d/B001LJSRJK/ref=cm_cr_mpr_bdcrb_top?ie=UTF8

I still might pick one up though. I like the idea of laptop you can upgrade. Velcro an Odroid on the back with a power pack or two and away you go.

Phones are a complete computer system, they should make these for development boards or even go bigger like modular laptop. This is a niche product and as neat as it is I would not pay more than $80 for it without the wait and only 1/2 that if I have to wait for it to be designed. I would pay $200 for a modular laptop that included a raspberry pi zero especially if it was upgradable. But this as it currently is is nothing more than a toy.

@onebir
I am talking more like the One Laptop per Child project called XO infinity modular laptop. Doesnt need to be as rugged as theirs and would like more modern components but one where you could build and just plug in different development boards. All it really needs is a screen battery and places to put in specified size dev boards and modular ports… very much like the XO Infinity.

@birdog
I believe the Rhombus Tech device will have a ‘pass though’ card that lets you plug in dev boards.

@birdog
The Crowdsupply link only shows the micro-desktop, but they are also developing a laptop -> http://www.cnx-software.com/2016/01/26/rhombus-tech-15-6-libre-laptop-is-user-upgradeable-with-eoma68-cpu-cards/

i’m just finishing up the libre 15.6in laptop casework (installing the bamboo panels which arrived last month) and will be taking some photos in the next few days. sign-up will then be activated on crowdsupply. and yes, birdog: when you put in a pass-through card into an EOMA68 laptop (or tablet, or desktop, or anything else) it effectively becomes an HDMI+USB enabled docking station, providing a 2nd screen, keyboard, mouse, touchpanel, audio device – whatever the “base” unit has, it becomes available to the PC or the laptop or the smartphone it’s plugged into. HDMI and USB are universal.

Thanks, I do remember seeing that and have been looking for an update. That is exactly what I would love to buy. Although if I am extremely picky would love to see it in 11.6″ or ideally 13.3″ and that would have a bonus of extending the battery a bit. None the less I am sure you are not going to change now and will buy one anyway or a diy parts to build my own? Have you though of doing a blog or a running post in forums like the evildragon does for the Dragonbox Pyra? I bet he… Read more »

@Jean-Luc Aufranc (CNXSoft)
Thanks for clarifying, here is where i first saw the article. Love you posts btw.