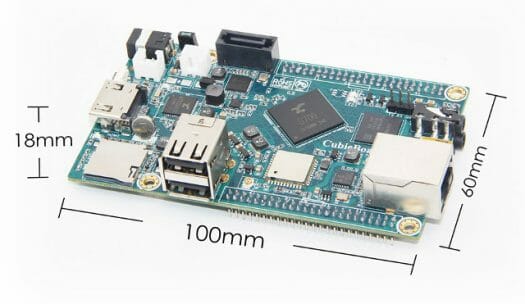 Development resources like tools, Android 5.1 firmware and SDK, documentation, schematics (PDF) and datasheet are shared via a Baidu link. Usually they also provide a link to MEGA to ease download for people outside of China.

The documentation appears to be in English, at least S700 datasheet and product brief which include the “application diagram” above. The processor actually supports Gigabit Ethernet, but they kept the Fast Ethernet connection in Cubieboard7 likely to avoid having to re-layout the PCB and increase costs. Right now, only Android 5.1.1 is available for the board, but the company intends to “continually maintain Android, Debian, Debian Server operating systems”.

What also caught my eye with the board is DVK522 expansion board, that allows you to insert Cubieboard7 and older variants with the same form factor to more easily access various display and other interfaces, connect Arduino shields, etc… It’s been available since 2014, but I’ve only noticed it today.

Cubieboard7 does not appear to be available yet, and pricing is unknown. For reference, Cubieboard6 is sold for 420 RMB ($62.33) on Taobao, and $98 on Amazon US, and we can expect the new board to sell for a few dollars more ($10 to $15 extra?). DVK522 expansion board has been designed by Waveshare, and sold on their website for $33.99. You may want to visit Cubieboard7 product page for a few more details about the development board itself.

Thanks to Aleksey for the tip.

I’m always amazed to see that vendors’ laziness drive them into saving one week of work to avoid changing 4 traces on a PCB resulting in a crippled design that doesn’t make an efficient use of the SoC they selected. When you have native SATA and GigE on the chip, you cannot reasonably sell a board limited to fast ethernet and expect it to succeed, especially when you’ve been selling cheaper and better designs for several years! Guys, don’t buy this and wait for the updated design which will properly provide GigE. Also, I couldn’t find any info on the… Read more »

Willy :
When you have native SATA and GigE on the chip

Huh? SATA is provided by a JMS578 USB-to-SATA bridge connected to an ‘USB2.0 XHCI controller’ according to this ‘Application diagram’. This is where I stopped reading since… what to expect from ‘technical documentation’ then? Based on experiences with S500 software support and ‘quality’ of provided information/documentation two years ago this feels just like a huge waste of time.

@tkaiser
The block diagram may not have been properly updated, but S700 datasheet shows USB 3.0 is supported, and the schematics shows it’s using that USB 3.0 interface for SATA.

@Jean-Luc Aufranc (CNXSoft) Properly updated or not… XHCI is not and was never USB2.0. 🙂 If I see such stuff I already loose faith in the manufacturer’s ability to provide correct information. Too much time lost due to carelessness and ignorance. Just looked into my tests with S500 from a few months ago (Armbian forum, at the bottom of the ‘Some storage benchmarks on SBCs’ thread). At least with S500 UAS was possible eventually (back in 2015 Actions Semi engineers asked what that is according to LeMaker) but performance numbers look not that great (120 MB/s) especially compared to other… Read more »

BTW: ‘leaving the linux-sunxi comfort zone’ was meant as a hint that for CB1/CB2/CB3 there exists superiour software and support situation due to open source communities. Starting with CB4 that has changed (Allwinner A80 still more or less useless with mainline kernel), the same with CB5 (Allwinner A83T) and it’s not different with Actions Semi SoCs on CB6 or CB7 now since there is no vibrant community around. What then happens is that you’ve to rely on vendor software/support offerings (same story with all those Banana Pi for example, first A20 based boards and their H3 board are supported by… Read more »

tkaiser :
Huh? SATA is provided by a JMS578 USB-to-SATA bridge connected to an ‘USB2.0 XHCI controller’ according to this ‘Application diagram’.

Oops, sorry I misread it. So it’s even worse. They’re proposing a regressed board compared to the cubietruck. Thanks for opening my eyes 😉

cnxsoft will have to get a sample and test it 😉

@Mum
No need for sample :). The only mistake is in the block diagram. All other documentation including the schematics, S700 product brief, and S700 datasheet point to USB 3.0 (XHCI).

SDK and android image now available on MEGA, link not yet on the product page.

There is also a board based on their s700 som. Can be purchased on Aliexpress