Last year, Realtek Ameba IoT SoCs and development kits launched with boards such as Ameba Arduino, and later, the family got some buzz thanks to $2 RTL8710AF modules like Pine64 Padi IoT stamp, which looked competitive priced against ESP8266 SoC, and featuring an ARM Cortex-M3 core. Back to 2017, ESP8266 appears to still be the preferred platform for makers, and the community around Reatek Ameba processor is relatively small, but maybe the solutions are being integrated into commercial products rather than hobbyists project. Today, as I browsed the web, I noticed that are also some Realtek RTL8195AM module with WiFi, and NFC starting with an “Realtek Ameba-RTL8195AM WiFi & NFC Module” I first found on DFrobot for $15 per unit, but after spending a bit more time searching, I ended finding what looks like the same model for $8.99 including shipping on IC Station. 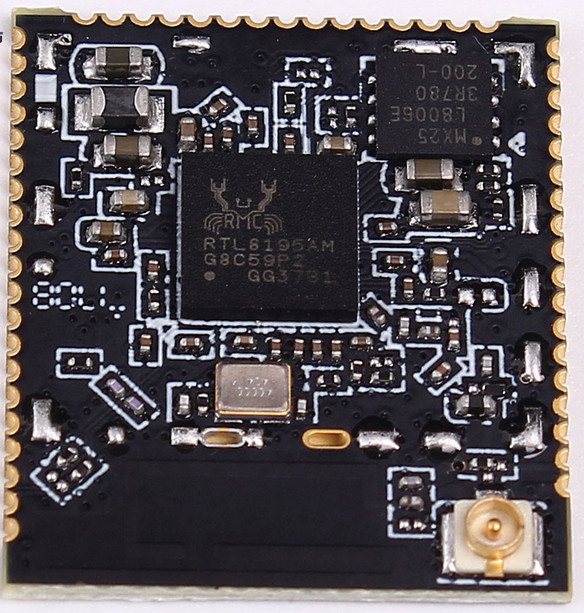 The module can be programmed with the Arduino IDE and Micropython, and you can have access to the SDK via Ameba IoT website. For evaulation, you may consider to order the module with breakout board instead going for $9.74 shipped.

The module appears to be manufactured by Shenzhen Minjun IOT Technology, and you’ll find more technical details and information about the module on the product page. Other RTL8195AM modules include CC&C WM-8195AM, and Rayson WFM-250, none of which appear to support NFC.

I think most rtl8711 and rtl8195 modules “support NFC” by breaking out the pads for the NFC antenna. If you don’t need USB I think RAK sells a rtl8711 module for $4