Back in 2012, Texas Instruments introduced DLP LightCrafter pico projector evaluation module powered by a TMS320DM365 ARM9 processor @ 300 MHz running embedded Linux, and selling for $599. Since then, we have seen many products including projectors based on DLP technology such as standalone tiny projectors, Windows mini PCs, Android TV boxes, tablets, an even light bulbs. However, so far I can’t remember seeing any easy way to easily integrate DLP projector with the cheap ARM Linux development boards available today. 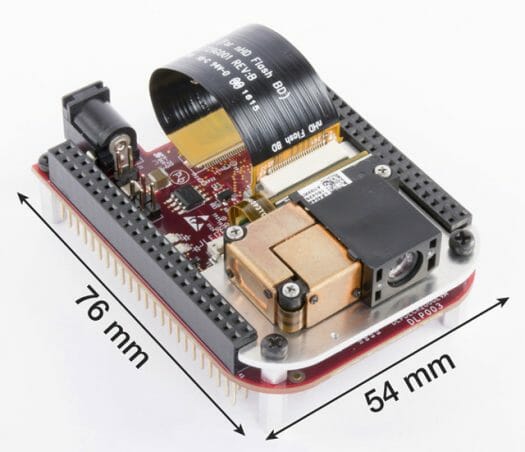 Texas Instruments has now filled that void with DLP LightCrafter Display 2000 EVM that adds a pico-projector to BeagleBone Black (or Green) based on the new 0.2″ DLP2000 DMD (Digital Mirror Device) chip. The board is comprised of two subsystems:

It is recommended to power the EVM with a 5V/3A adapter, but it’s also possible to power it through the host board as  long as it can supply at least 320 mA.

There are then two ways to use the module, either via a host processor, as would be the case if you connect it to a BeagleBone Black board, or without host processor, through a USB to I2C dongle connected to a computer.

When using the BeagleBone Black / Green, you’ll need to install the latest Debian image first, then the board will automatically detect the add-on board using the EEPROM data, and configure the boards with an RGB888 interface for the video data, and I2C for the commands, which can be sent using i2cget & i2cset tools. You’ll find the list of I2C commands in DLPC2607 Software Programmer’s Guide.

The relatively low resolution (640×480) may not be ideal to watch movies, but TI envisions their latest DMD chip to be used for home automation displays, factory 4.0 HMI displays, and in thermostats, Bluetooth speakers, and so on.

DLP LightCrafter Display 2000 EVM, is selling for $99 on TI eStore, while DLP2000 DMD chip is sold for just $20. You’ll find more information on the product pages for the EVM and DMD chip.

Via LinuxGizmos and EETimes

I give it about four months before someone makes a step-and-repeat DLP 3D printer out of this.

This is perfect for my Barbie Dream Home Theater(tm)!!!! I can finally build Ken a man-cave.

This is so awesome !
I was actually missing a small display for my BBB.
The only way this could have been better was if it had an HDMI interface but this will do.

Thanks a bunch for posting about it 😀