Most recent low power Intel mini PCs are now based on Apollo Lake family with SoC such as Celeron N3450 or Pentium N4200, but we’ve known for a while that Gemini Lake processors will succeed those starting in Q4 2017, and we can expect some Celeron/Pentium SKUs like Intel Pentium J5005 or Intel Celeron N4000, but so far I had not seen that many details. However, an anonymous tip pointed me to some interesting publicly available information. 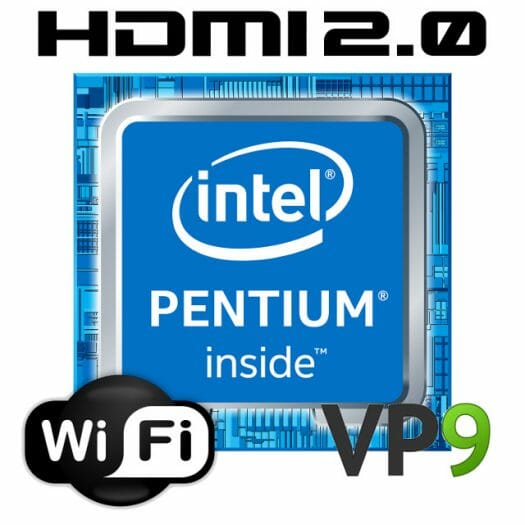 First, a kernel patch reveals a little about the CPU pipeline:

Add perf core PMU support for Intel Goldmont Plus CPU cores:
– The init code is based on Goldmont.
– There is a new cache event list, based on the Goldmont cache event list.
– All four general-purpose performance counters support PEBS.
– The first general-purpose performance counter is for reduced skid PEBS mechanism. Using :ppp to indicate the event which want to do reduced skid PEBS.
– Goldmont Plus has 4-wide pipeline for Topdown

Goldmont Plus is the microarchitecture  used in Gemini Lake processor. Goldmont found in Apollo Lake processors only uses a 3-wide pipeline, so there should be some performance benefits here.

Another patch indicates the processor will natively support HDMI 2.0 output:

Geminilake has a native HDMI 2.0 controller, which is capable of driving clocks up to 594Mhz. This patch updates the max tmds clock limit for the same.

Apollo Lake processors only support HDMI 1.4 natively, and while HDMI 2.0 is possible, it requires an external DP to HDMI 2.0 converter, which won’t be needed in Gemini Lake processors.

Finally, as I searched more about the Goldmont Plus microarchitecture, I found Wikichip page that also claims the processor will integrate an 802.11ac wireless controller, so no external module is needed. I could not find any other reference to this last claim, except for a FanlessTech tweet also claiming DDR4, Bluetooth, and 4MB L2 cache. Gemini Lake processors will be manufactured with 14-nm process like their Apollo Lake predecessors.

At last, the one we have all been waiting for.

No specific mention of HDR though, so I do hope that HDMI 2.0 will also encompass a and b revisions.

Lets hope that the new Intel platform would finally bring support for UFS 2.1 storage, instead of the aging eMMC 5.1 standard.

And DDR4 is also important.

Intel platforms lag so much behind ARM ones, in this matter! ARM SoCs already have these features for a few years!

ARM can have all the features you want, but if you want Windows and to run x86 apps, you’re stuck with Intel.

Even if Windows is slowly coming to ARM, AFAIK it’ll be limited to Store apps, making it not much better than Android. And it’ll be a cold day in hell when all software developers add support for an entirely different CPU architecture.

Gemini Lake will surely be a godsent for those who want a decent miniPC without neither spending much or relying on cheap ARM chinese knockoffs.

I’m curious to see what AMD comes out with on the low end of their “Raven Ridge” chips (Zen + Vega APU). Demo units at Computex had HDMI 2.0 and DDR4 but there haven’t been any SKU’s released yet that I know of. Hopefully they’ll have something on the cheap end.