Russia based Yota makes some unusual phones with dual display with a standard color front display, and an e-paper rear display that allows you to check the time without pressing a button, keeping displaying important information even when your battery is completely discharged, and more. The first Yotaphone was launched in December 2012, followed by a prettier and more powerful Yotaphone 2 in December 2014, but we’ve had to wait nearly three years for the company – with some fresh money and technical involvements from Chinese partners – to introduce YotaPhone 3 at the Russian Embassy in Beijing. The phone is powered by a Qualcomm Snapdragon 625 processor, and features a 5.5″ super AMOLED display on the front, and a 5.2″ E-Ink display on the back. 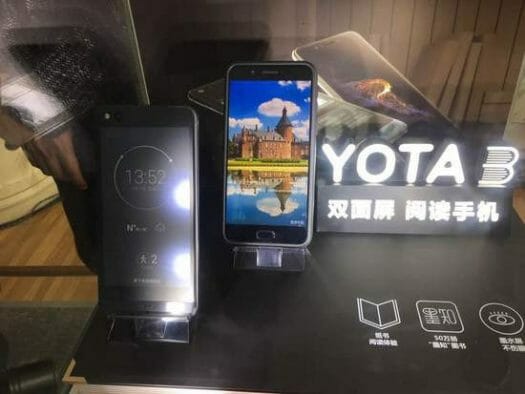 The phone runs YotaOS 3.0 based on Android 7.1.1 Nougat, and comes with apps for the E-ink display that are specific to the Chinese market.

YotaPhone 3 will first sell in China with pre-order starting on JD.com on September 5th for 2,398 CNY ($360) for the 64GB version, and 3,098 CNY ($465) for the 128 GB, and actual sales starting on Setpember 18th. The phone will later launch in Russia, where it will be called YOTA 3. It’s unclear when/whether it will sell in other markets, but you can be sure it will soon show up on Chinese e-retailer websites such as Aliexpress, GearBest, Geekbuking, and others.