This is a guest post by Tharma Rajan G, Project Lead, e-con Sytems.

What is the best way to save power consumption of your embedded Linux system? Is there any way to save max power and resume operation ? Yes. It is ‘hibernate’ mode, one of the Power Modes in Linux. This article talks about how we utilized this ‘hibernate mode’ in our Reference Platform Kit Meissa-I with eSOMiMX6-micro SOM.

Meissa-I is a dual board solution that features eSOMiMX6-micro Computer on Module & carrier board. Meissa-I development board runs Linux and Android Marshmallow (under development). eSOMiMX6-micro is based on Dual/Quad core ARM CortexTM-A9 based CPU @ 800MHz/Core. It has 1GB LPDDR2 and 4GB eMMC FLASH (expandable upto 32GB). The eSOMiMX6-micro module also has the Wireless LAN and Bluetooth module.

Power Management is a key feature in embedded Linux system and there are two types for implementing the power management on x86 platforms:

ACPI is the newer of the two technologies and puts power management in the hands of the operating system, allowing for more intelligent power management than is possible with BIOS controlled APM.

The power management subsystem provides a unified sysfs interface to userspace, regardless of what architecture or platform one is running. Generally sysfs filesystem is mounted in /sys directory and one can see that power management related entries in /sys/power path. 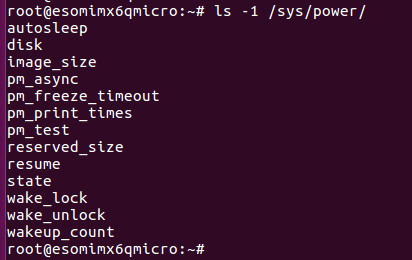 Swap memory is the area on disk that is reserved to be used as extra RAM when your system needs more RAM than what is available. When your embedded Linux system runs out of free memory, then kernel can move some of the inactive pages into swap partition to make free room for active pages in RAM memory. If you plan to use hibernation in your embedded Linux systems, then you swap space have to be at least twice the RAM capacity.

Now we will prepare the Swap Space to hold the Hibernation Image.

Run a process, to verify restoring the hibernation image.

Before starting to resume from hibernate state, append resume=/pathto/swapspace command line parameter to read back hibernate image from that specific swap partition. Let us change the bootargs for hibernate resume state , and run the bootcmd.

Now you will observe, hibernate image is read from swap partition and resumed.

The power data is obtained by computing the product of voltage and current measured.

We have taken our eSOMiMX6Micro SOM as reference, it takes nearly 19 secs to execute watch command which is part of rc.local script file.

While resuming from hibernate, it takes 16.76 secs to retain and execute the same watch command process state. 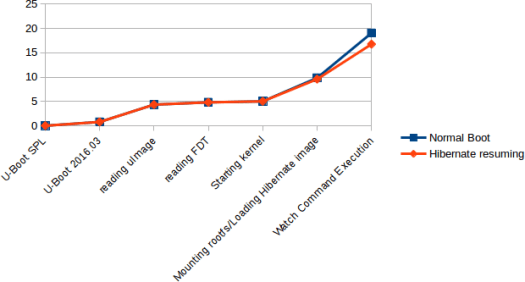 From the above analysis on ‘hibernate mode’, we find it to be the best choice for putting the system in low power state. Also, it consumes minimal time for ‘hibernate resuming’ as compared to normal booting time. The only downside we observed is that, manual interaction was required to resume the device from hibernate mode.
I believe, this hibernate power mode analysis will be very useful to you. We will see you next time with another interesting article.

Thank you very much! What is are the times for sleep and suspend, both sleeping and waking?

Hope this helps! Would love to hear more of your thoughts.