LoRaWAN protocol is one of the most popular LPWAN standards used for the Internet of Things today, but some people found it “lacked efficiency, did not support direct node-to-node communication, and was too costly and far too complicated for many applications”, so they developed their own LoRa wireless protocol software called RadioShuttle, which they claim is “capable of efficiently sending messages in a fast and secure way between simple LoRa modules”. 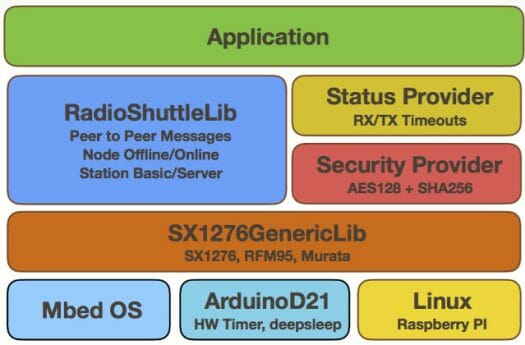 Some of the key features of the protocol include:

The developers have also designed their own LongRa board, compatible with Arduino Zero, based on Semtech SX1276 LoRa radio chip with a 168 dB link budget and support for 868 MHz & 915 MHz frequency. The board can be powered by its micro USB port, or by two AA batteries if you’re going to use the board as a wireless sensor node.

RadioShuttle protocol is not open source for now, and while it support multiple devices as stated previsouly, if you are not using LongRa board, a 25 Euros license is required per device.

It was too good to be true, use LongRa-board or pay 25e per device.

@Pertti Erkkilä
Oh that’s why I could not find the library or source code… I’ve updated the post accordingly.

Not open source, then it will die. It’s probably already dead. It’s like tcpip not being open. Won’t work.

@zoobab
Yep, I think you are right. This type of library should be open source. Otherwise it makes the adoption harder, so nobody will use it. You can build consulting etc. around it, if you need the money. Support, Consulting, Enterprise Versions etc.