With the Internet of things booming and taking a more important role in our lives, security will become more and more critical. So far, it has often been an afterthought with modems & routers frequently shipping with default username and password, and getting security right is really hard, as shown by the recent CLKSCREW attack that somehow leverages DVFS to break ARM TrustZone security, and that “is not a software bug, nor a hardware bug, it’s a fundamental part of the energy management design”, so most ARM platforms are vulnerable. Optimal security normally combines software and hardware, so having a platform to experiment with different HW security solutions would be useful, and that’s what Secure96 Mezzanine board for 96Boards aims for. 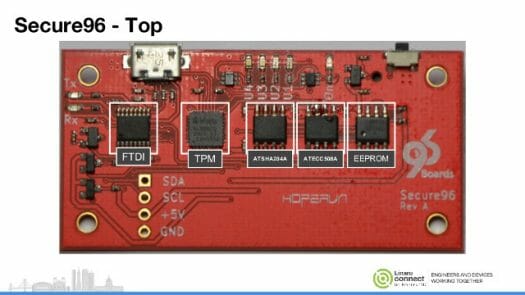 Launched in 2011, ATSHA204A is used for symmetric authentication with a random number generator, a unique 72-bit serial number, I2C/SWI host interface, 88 bytes used for configuration, 512 bytes used for data, and 64 bytes of OTP storage. It can be used for accessory (battery, cartridge, …)  authentication, secure boot, data integrity verification, and session key exchange. Joakim Bech, Tech Lead for Security Working Group at Linaro, has already published some code to leverage that chip, currently (& temporarily) posted on his own Github, but will be moved to Linaro repo later on.

ATECC508A shares many of the feature of the first chip, but adds asymmetric key pairs. Sadly it requires an NDA to get the datasheet and TRM, It’s supported by the Atmel CryptoAuthLib, so it might be possible to study the code to better understand it. He has not done work on the software part yet for this part. Note that I previously reported about a demo for secure IoT connectivity using ESP8266 + ATECC508A.

Infineon SLB9670 TPM has just been tested with Intel TSS TPM 2.0 resource manager, and the tpm2.0 tools, but again, no software has been implemented for this chip on Secure96 board yet.

Going forward the rough plans are to:

You may want to flick through the Linaro Connect presentation slides for more details.

The video has also been uploaded, but the audio is not that clear. . [Update: You can purchase the board on Amazon for $31.99]. Visit 96Boards Mezzanine products page for details.

Charbax also made a video. The price will be around $20, and start selling next month
https://www.youtube.com/watch?v=JGkl3oC9gtA&feature=youtu.be&a=

If the TPM is compliant with the TCG version 2.0 specification, then I think the link in this article is incorrect.

Please let us know as soon as we can place our orders. This should be a very popular board to enable security development.

@john
I did not pay attention to that one. Interesting that Infineon has two pages for the exact some chip, but different firmware version.

@Jean-Luc Aufranc (CNXSoft) I think there are differences in the chip for each listed SKU on the Infineon product pages. The FW version is obviously important, but each SKU is a different chip independent from FW version. The SLB 9670 VQ2.0 is a different chip from SLB 9670 XQ2.0 and both of those chips are different from the SLB 9670 VQ1.2 chip. I think we need someone to confirm the exact SKU that is used for the board before we start to order them. Also, the link in the slides from the conference is also incorrect. Please note that I… Read more »

@Jean-Luc Aufranc (CNXSoft)
How do we order the Secure96 board?

Will there be another version of the Secure96 board with the ST Microelectronics ST33TPHF20SPI device?

Thank you for providing updates here.

@john
It does not look like it’s for sale yet. Maybe next month?

I doubt there’s will be another version any time soon.

How can we order it now? Thanks!

@john
Once it’s available it should be listed on 96Boards website linked at the end of the article.
It’s not there, so most likely we can’t buy it yet.

I see it there now and I have ordered some to kick off. Is the Dragonboard 410c a good choice to use with the Secure96 board?

@john
You may check on IRC channel or 96Boards OpenHours.
The board looks to be made for 96Board IoT Edition, but it should work on 96Boards CE boards too.
What matters is the current software support.

Getting started guide for Secure96 board with DragonBoard 410c -> https://www.96boards.org/blog/getting-started-with-the-secure96-tpm/