Many people use smartphones now, but “dumb” feature phones are still being sold, as they are cheaper, some may find smartphones too complicated to use, while others wary about privacy issues. However, most feature phones comes with 2G connectivity, and with 2G sunset in many countries, I’ve recently realized it’s not so easy to find a simple phone with 3G cellular connectivity. The good news is that Nokia 3310 3G has just been announced by HMD global. 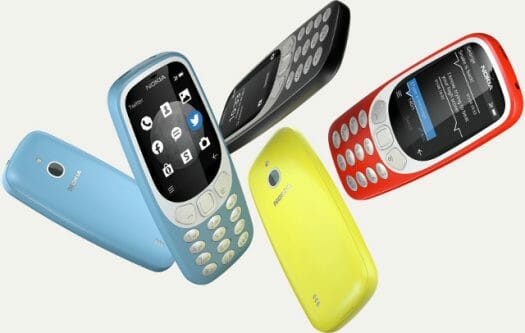 Nokia 3310 3G is said to run “Feature OS” powered by Java, and ships with a quick start guide, thje battery, a micro USB charger, and a WH-108 headset.

The phone is not exactly cheap for this class of device, as it will sell for “a global average price” of €69 (~$81 US) starting this mid-October. Visit the product page for more details.

Sorry, but I fail to understand the interest and relevancy of this post ???

These phones are still relevant to some people, and like @Jean-Luc Aufranc (CNXSoft) says, it’s unusual to find one that supports 3G. I have a strong sense of nostalgia for phones that only need charging once a fortnight 🙂

Of course they are relevant, I still use a Nokia 1100, that (with a new battery I bough last year) is good for 10 days, on average.
But what’s the need to have 3G on a small and sometimes unreadable WAP 2.0/xHTML browser?
Unless there’s a good reason, this post looks more like advertising…?

JotaMG :
Unless there’s a good reason

May I help you? What about reading 1st paragraph, 2nd sentence again? Care to elaborate on how useful a 2G only device is in a region where 2G has already been shut down or this is to be expected soon? Thank you.

Thomas, thanks for being my reading glasses 🙂
But, I’m curious, what region without 2G could that be?
Or, better, what % in terms of global 2G audience that region represents?

The reason the original Nokia 2G phones were so popular was you could customize the case to your ultimate desire.

Everyone had their own favorite.

@JotaMG No idea, but I heard some rumours that soon there will be fancy technologies available like ‘search engines’ or ‘online encyclopedias’. So in the future you may be able to search for ‘2g shutdown’ or something like that and then end up surprisingly at https://en.wikipedia.org/wiki/2G#Shutdown or something like that. BTW: I’ve also been told an interesting strategy to deal with stuff I don’t understand would be to think about me being the problem (maybe reading a blog post again to get the idea). Nah, not for me! Communication is defined by the sender being the problem and never the… Read more »

This is a HUGE development. In countries forcing carriers to turn off support for 2G affordable “dumb” phones with very long battery life and (most important) no Google to spy on everything you do with Android, the only real option is old used Nokia 3G compatible phones (due to demand, they are now expensive and hard to find). Unfortunately, the “new” Nokia company made a BIG mistake when they released the first 3310 retread phone as 2G only. Now here in Indonesia for example (where 2G still works), the shops stock the 2G only 3310 version phones but cannot sell… Read more »

@tkaiser
Maybe I should try to write two paragraph at the top instead of one… That’s what Liliputing and Linuzgizmos do… Yet I’d still think people would read the top of the post, especially regular readers who must be familiar with the way I construct my posts.

tkaiser: i see you don’t miss a chance to do your daily fingers gymnastic exercise on the keyboard… 😉 drone, tkaiser: It may interest you to know that some sources of info are either wrong or incomplete. Take Australia, for instance, most of the major carriers are dropping 2G, but people are still able to use their 2G phones, because every area is covered by small local carriers that operates the 900MHz 2G band. In fact, on 96% of places where 2G has been dropped by a carrier, you can still have 2G from other party. And it will continue… Read more »

A phone, I wonder about:
https://hackaday.io/project/19035-zerophone-a-raspberry-pi-smartphone

And of course, if Purism will raise enough money for this one:
https://www.cnx-software.com/2017/08/25/purism-librem-5-open-source-linux-smartphone-focuses-on-privacy-crowdfunding/

@JotaMG
> But, I’m curious, what region without 2G could that be?
> Or, better, what % in terms of global 2G audience that region represents?

For an example, Russian Tele2/Rostelecom carrier does not support 2G in Moscow (12 million people).

As you probably know, you can get Moscow area 2G coverage from Beeline, MTS, Megafon… (and sometimes with better signal quality)
So???

Thank you for reading my comments, and tracking this. I’ll keep an eye out for this much needed device (IMO) here in Jakarta.

@JotaMG
There are only 3 carriers in Australia, 2 of them have already started to shut down their 2G networks (Optus/Telstra) and the other (Vodaphone) is going to shutdown in around 5 months or so.
Not sure who you thing is going to provide 2G after that…

Got bombarded from vodaphone in Australia with messages that 2g was finishing soon. If I tried to make a call of any kind I had to put up with their message for over a minute before I was connected to my call. I rang and complained, explained that I was old and if I had a stroke or heart attack that one minute could be life or death for me. They dropped the message off STRAIGHT AWAY, in my case. Otherwise every call I made till they changed to 3g would have the message, THAT COULD BE A MONTH OR… Read more »