Purism is computer manufacturer founded in 2014 whose mission is to “provide the highest quality hardware available, ensuring the rights of security, privacy, and freedom for all users”, and so far, they’ve delivered several Intel Core i5/i7 laptops running their PureOS Linux distribution based on Debian with an emphasis on privacy protection. The company has now launched a crowdfunding campaign on their own website to develop and manufacture Librem 5 Linux smartphone with the same philosophy. 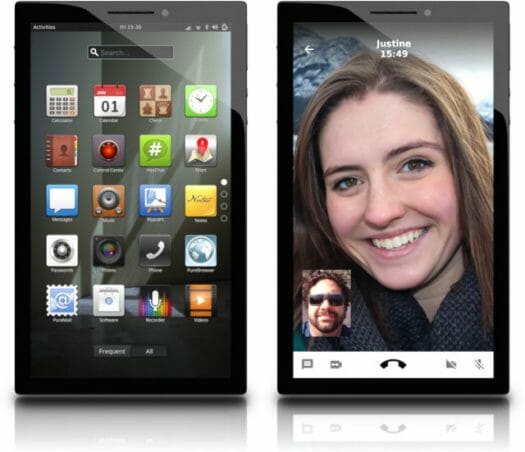 The phone will use open source software even for the GPU, so the company currently selected i.MX6 for the project since they can use etnaviv open source driver for the Vivante GPU, but they hope to switch to the more powerful i.MX8 processor for the final design, which explains why the hardware specifications are not set in stones yet:

While the phone will ship with PureOS by default, it will also be compatible with other distributions including Debian GNU/Linux, Ubuntu, Fedora, SuSE, Arch Linux ARM, and SubgraphOS. At launch, PureOS will offer basic communication services: phone, email, messaging, voice, camera, browsing, but more features will come after launch.

The phone will run native HTML5 apps such as YouTube, Twitter, and Instagram, but it might also be possible to run Android apps via Shashlik for a more extensive choice of apps, although the company’s long-term goal is to utilize native applications that adhere to their philosophy. The company selected Matrix as the chat solution, instead of other encrypted chat services because those are proprietary solutions. The final goal is to have all software and hardware open sources (up to the schematics level), and Purism aims to get FSF RYF endorsement, but it might not be possible for such device because of the non-free kernel firmware needed for RF chips. 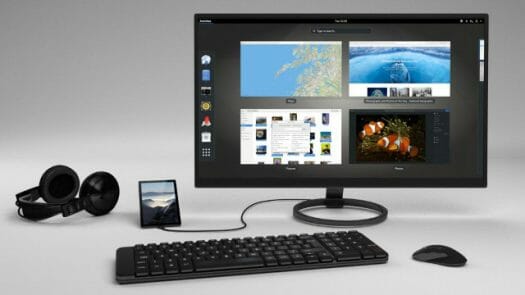 The phone will support mobile desktop convergence with an option for a compatible keyboard, mouse, and monitor in order to use your phone as a desktop computer. While many crowdfunding projects have a prototype of not so far from manufacturing, with Librem 5 smartphone, your pledge will also cover the huge software development undertaking needed to bring the project to life. There are risk on the hardware side too, as if you end up with an i.MX 6 quad core Cortex A9 processor, you’ll have a rather slow and power inefficient phone for… 2019, when the product is expected to ship. NXP i.MX 8 with Cortex A72 and Cortex A53 cores would be a better technical option, but it’s unclear whether the company will be able to procure it since it’s not exactly designed for smartphones, and it features a new Vivante GC7000 plus GPU that would need to be supported by etnaviv [Update October 30, 2017: Good progress is taking place for Etnaviv port to GC7000]

But if you’d like to go ahead and help the project reach its 1.5 million dollars funding goal, you can pledge $599 for Librem 5 Phone with charger, $1,399 with the addition of a 24″ display, keyboard and mouse, and $1,699 with a 30″ display kit instead. All those rewards are expected to ship in January 2019, but if you want to help with software development, you can also get a $299 development kit with board, display and accessories that will be ship in June 2018. Shipping is free to the US, but adds a whopping $80 to the rest of the world…

Having “smartphone” and “privacy” in the same sentence almost is an oxymoron 🙂 When you see these people with all their applications connected 24×7 to all their e-mail and social network accounts without ever having to type a password, and when you hear them speak so loud that they’re forcing 20 persons around them to participate to the conversation, with the speaker turned to the maximum in the hope that these persons also hear the return channel, and reading their work e-mails in the train on very large and bright screens, I don’t believe a single minute that there is… Read more »

Sorry to say, but this is a terrible product based on the hardware spec.
The i.MX6 is going to draw way too much power, even compared to the worst mobile phone SoC in the market. Also, how is the i.MX6 any more open source, beyond the GPU drivers, than any other mobile SoC out there?

I don’t think these guys understand too much about the difference between an embedded SoC and a mobile SoC, as the two are not even remotely the same these days.

Secure smartphones aren’t a consumer market. It’s the public and private sectors that used to buy blackberry. They switched to Apple when the word got out that blackberry sold out to the 3-letter-agencies. But, recently Apple’s encryption was owned so there’s a real opportunity to be made here.

Actually the i.MX6 were originally designed and released with mobile battery powered usages in mind: http://www.eenewseurope.com/news/reference-board-optimising-power-imx6-dual-and-quad-processors

It’s just that their extended LTS, low graphics performance and high price barred them from smartphones. Admittedly, they’re likely more suitable for tablet than smartphones… But batteries have made great strides in recent years so they should be good enough considering you won’t be playing any 3D games on this thing.

How is this a crowdfunding campaign? It looks like one, but you’re just spending money in their online shop.

Choice of SoC is dubious, at best. Giving the option for an alternative to iOS/Android with desktop convergence, at that, is highly welcome.

@Luc Verhaegen How’s that different from regular kickstarter and the likes? @blu What else could they use for a libre GPU? Not sure why everyone is so much against it. Mid/High-end MT chip have similar numbers of A72s and A53s. Maybe they picked up an i.MX8 dev board, powered down the useless lanes and the extra real-time processor and found the power profile is good enough. How much real-estate is wasted on 3D acceleration in the typical SoC that barely sees a couple of hours of use a week? Intel managed to build x86 smartphones for fuck sakes… It can’t… Read more »

@RK I hope you saw the date on that new release, 2012. Also, 35 power rails, that’s going to be fun to design a mobile PCB around. Compare that to any modern (within the last 2-3 years) mobile SoC and you quickly realise that it’s not a chip suitable for a modern mobile device.

Also, nothing in that press release suggests it was ever designed to go inside a phone. A mobile device could be a lot of thing things, like a mobile terminal for example.

But the are not the ones going to participate to a crowfunding campaing! Only paranoid consumers would.

i.MX6 SoC might be far from optimal, but unsuprising pick for me. It is one of the few they can choose from. i.MX6 SoC has full documentation publicly available and it is even possible to run Android on it with mainline kernel and Mesa GPU driver, so software can be truly “libre”, e.g. no blobs of any kind, and functional (open source GPU driver).

RK : @blu What else could they use for a libre GPU? Not sure why everyone is so much against it. Mid/High-end MT chip have similar numbers of A72s and A53s. Maybe they picked up an i.MX8 dev board, powered down the useless lanes and the extra real-time processor and found the power profile is good enough. How much real-estate is wasted on 3D acceleration in the typical SoC that barely sees a couple of hours of use a week? Intel managed to build x86 smartphones for fuck sakes… It can’t possibly be any worse than those. They could’ve used… Read more »

The minute I see brands like “Purism”, “System 76” etc., I expect to see HUGELY over-priced products. I recommend you steer clear of this nonsense.