Since Microsoft bought Nokia’s smartphone division, the company is not allowed to sell smartphones until after the end of 2015, but that does not mean Nokia is standing still, and they’ve just unveiled Nokia N1 tablet based on Intel Atom Z3580 quad core processor, with a 7.9″ display, 2GB LPDDR3, and 32GB eMMC. The tablet runs Android 5.0 Lollipop, and it’s also the first device I’ve seen with a micro USB 2.0 type C reversible connector. 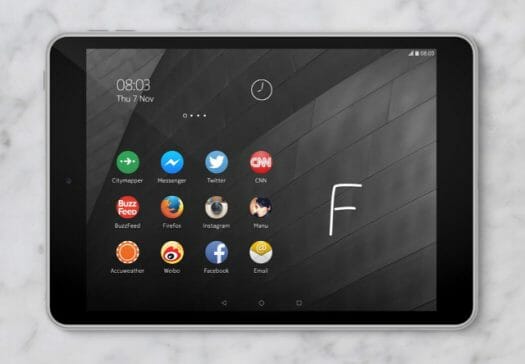 Beside running Android 5.0, Nokia’s tablet with also feature with Nokia Z Launcher app, which just landed on Google Play, but is incompatible with all of the 30+ devices I have registered on Google Play, apparently because of my location. The tablet will come with Google Play Store in markets where Google Play is available.

Nokia N1 is not available right, but it will start selling in China on February 19, 2015, before before being released in Russia and Europe. Price will be about $249 before tax. Visit Nokia N1 microsite for more details.

I thought the reversible USB connector part of the 3.1 standard, not 2.0 type C

@Sean
I thought so too, but they mention a micro USB 2.0 type-C connector on Nokia N1 website..

Whilst I applaud the Nexus9 and this (hopefully others to follow) making screens in the 4:3 ratio (far better for browsing IMO), having made a paper template, 7.9″ diagonal is far too small! It needs to be closer to 9″
At potentially £250 its a tough sell against the Hudl2 at £130

Lots of innovation of cpu, number of cores, etc, but there doesn’t seem to be much in terms of new functionality. For example: 1) supporting dual boot Windows 8 & and android.. like the Ramos i10 with ConsoleOS 2) e-ink display on back of tablet (like the yotaphone) 3) AM/FM Radio Receiver, FM Transmitter, Software Defined Radio (SDR). Seriously, no tablet has an am radio, what’s the deal?! 4) HDMI input and/or Built-in ATSC Tuner for Over-the-Air (OTA) HD and PVR recording (probably would need external OTG drive) 5) Induction charging (like Aikun) 6) More sensors! Developers will come up… Read more »