Hardkernel teased us with ODROID HC1 Home Cloud server, and ODROID MC1 cluster last August with both solutions based on a cost down version of ODROID-XU4 board powered by Samsung Exynos 5422 octa-core Cortex-A15/A7 processor. ODROID-HC1 Home Cloud server was launched shortly after in September for $49.

It took a little longer than expected for the cluster to launch, but ODROID-MC1 (My Cluster One) is finally here with four ODROID-XU4S boards, and a metal case with a cooling fan. The solution is sold for 264,000 Wons in South Korea, and $220 to the rest of the world.

ODROID-XU4S is software compatible with ODROID-XU4 board, so you could just use the Ubuntu images (Linux 4.9 or Linux 4.14), and instructions from the XU4 Wiki, but to make things easier,  they’ve provided several tutorials specific to the cluster use case:

Note that the cluster is not sold with accessories by default, so you’ll need to make sure you also get a Gigabit switch with at least 5 ports,  five Ethernet cables, four micro SD cards (8GB or greater), and four 5V/4A power supplies (or other 80W+ power supply arrangement as shown below). 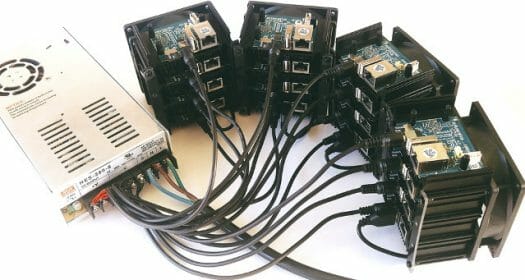 The ODROID-XU4S PCB seems to be the HC1 one just without JMS578 and the SATA connector being soldered. Which is a bit sad since the Exynos features 2 pretty fast USB3 ports and the SuperSpeed data lines of one of them are not exposed now (only available on the PCB where the JMS578 is usually placed).

@tkaiser
Yes, it’s the same board.

@tkaiser
Well, if it is the same board, the usb3 lanes will be accessible. But unfortunately in the xu4 design the gigabit nic is connected to the USB3 OTG port… Else you would be able to use them as 4 fine USB3 devices with a lof of computing power.

I’ve been thinking about ordering one to see if it runs my build farm faster than my MiQi-based cluster. But I’m hesitating. I find the cluster a bit expensive for what it is : there’s no local storage so you have to add some. In the end it’ll be around $60 per board. Also I’ll have to buy a new, larger PSU, as the 4 MiQi and the switch only require a single 60W PSU to run stable. In fact the board is a stripped down version of the HC1 (no SATA controller, smaller heatsink making it more likely to… Read more »

willy : In fact the board is a stripped down version of the HC1 (no SATA controller, smaller heatsink making it more likely to heat and make the fan spin), and buying 4 HC1 would be cheaper than a single MC1. Oh, didn’t notice that each node is $5 more expensive than the HC1 which for sure provides better heat dissipation — based on my tests I would assume your use case will run on a bunch of HC1 lying next to each other and not stacked up with ~1.8 Ghz on the A15 cores (w/o fan). With a totally… Read more »

@willy
Hardkernel has some numbers in the build farm tutorial for the time it takes to build the Linux kernel using distcc with 2 to 8 nodes.

@Jean-Luc Aufranc (CNXSoft)
Yes I’ve already seen them but they just compare to their build node that they do not describe so it’s not easy to have a reference.

A standalone x86 machine with vt-d & PCI-E pass-through will beat this kind of cluster, if you want just try some new technology like Docker, Kubernetes & Hadoop. They should make it much smaller than x86 machine. For example use SPI flash to do PXE boot, use POE to fetch power from Switch directly.

fan :
For example use SPI flash to do PXE boot, use POE to fetch power from Switch directly.

Why not create a list of tests and results you would like from Odroid and send it to them?

fan : A standalone x86 machine with vt-d & PCI-E pass-through will beat this kind of cluster Not at this price. To put it in rough numbers, you have 16 2GHz cores, 4 DDR3-1866 channels and 8 GB of RAM for $220. For massively scalable workloads (and there are not that many), it can definitely beat an x86. My home build farm made of 6 MiQi boards (4 A17 at 1.8 GHz each) builds my kernels 2.5 times faster than my quad-core Skylake at 4.4 GHz. Building any single file however is much slower, it’s globally faster because 24 files… Read more »

@willy I think you missed @fan‘s ‘if you want just try some new technology like Docker, Kubernetes & Hadoop’ clause? Anyway: Since I had to mess around today with too many cables I thought about the MC1 setup too. IMO way too much cables and switchports needed (for a 200 node cluster you would need to waste 5 rack units for switches alone). Maybe Hardkernel could make use of an el cheapo switch IC like RealTek’s RTL8370 providing 8 GbE PHY and then create one cluster module using a huge 44x400mm metal heatsink with 7 Exynos 5422, 7 RTL8153 and… Read more »

The issue with the MC1 and the HC1 is the same. When you add import tax and transportation costs that same 220$ device suddenly costs 325 Euro. My single HC1 with shipping and import tax skyrocketed to almost 90 euro. That price gap in comparison with lets say a AMD Ryzen 1600 with its 12 threads and massive speed difference ( been doing tests on test setups between the HC1 and 1600 ). So even a 4 version HC1 or 1 MC1, has a issue with price vs performance. The moment you try to get the same performance with maybe… Read more »

@Benny
Buying from EU distributors should be a little cheaper. For example, MC1 is sold for 264 Euros including VAT @ https://www.odroid.co.uk/ODROID-MC1

Shipping (to France for example) adds 13.50 Euros.
Check the list of distributors @ http://www.hardkernel.com/main/distributor.php