But in order to go beyond network monitoring, the developers have designed Ubuntu Core based Fingbox hardware to add features such as access control (e.g. parental control), analyze the usage of bandwidth for each clients, find Wi-Fi sweet spots/ avoid black spots, verify your Internet speed, monitor devices in your network, and protects it with a digital fence that works against threats. 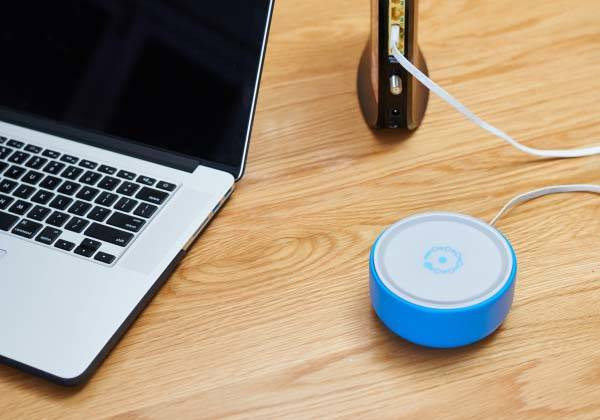 From a hardware perspective Fingbox is a round shaped Ethernet node with the following specifications:

The Linux (Ubuntu Core) device just needs to be connected to your network via an Ethernet cable, and powered by its adapter. You’d then run Fing app on Android or iOS, which will automatically detect the Fingbox, and allow you to easily monitor and control devices on your home network. The best way to clearly understand what the device brings to the table is to watch the demo embedded below.

Fingbox was launched through an Indiegogo campaign, that ended up very successfully with 20,000 backers, and over @1.6 millions raised, but now you can purchased it directly from Amazon for $129 with shipping to US, UK, EU, and Canada, or Fing website for other countries.

When I think about it, I’m wondering why we don’t get such functionality from the router directly, as surely that’s something vendors could implement in the firmware, except possibly on the cheapest models due to storage and/or memory limitations, with no added hardware cost. Feel free to comment if you can already use your smartphone to monitor and manage other devices via your router, or is Fingbox the only workable solution right now?

Well, I would kick a router in the trash if it would start to do what this thing does: Exfiltrating everything that happens in the wireless network it pretends to monitor/protect to Fing’s servers. Why do people buy devices that spy on them?

When Fing started back in 2010 or so, there was a rumour that it gives all the info it collects about YOUR network to the NSA….

Having said that, the idea behind the original Fing (not that Fingbox) can be very useful, if implemented by a trustable source.

@tkaiser
Are you sure they have servers to store the data in the cloud? It should not be needed.
The app has been around for years, and with 10 to 50M downloads, I can’t find any website mentioned privacy or security issues.

@Jean-Luc Aufranc (CNXSoft) If a device is on Amazon with more than 50 reviews, I usually skim through the 1 star reviews (since some of them usually highlight real problems) and the ‘Top critical review’ where this is explained in detail (and confirmed by Fing). It can not work without some remote servers on the Internet being alerted on your mobile phone somewhere out there that ‘an intruder’ is detected by Fingbox. This thing has to constantly exfiltrate everything to their servers for it’s ‘functionality’ to work. BTW: the whole functionality is MAC address scanning with a nice UI and… Read more »

Yes, lots of downloads, because it is really useful, in particular for novices.
(think about it, if you a intelligence officer, or just a scum, do you ever dream of a easier and better way to gather data from private networks around the globe, home and business??)
You see, the fact they refused to show or open their code has not helped at all the rumours….
Of course, there is no need for servers in the cloud (for the original app) or else , data can be moved around the internet in many dissimulated ways.

You can use your router and log in to the interface on your device already. At least wth an Arris modem, which is how the cable companies use our info for their self gain. Yes , it can already be done no need for an expensive f-ing lol

Fing on Android is reliable for getting connected devices on same network. I personally use it to scan IP of device attached like pi for ssh. But while getting IP of device connected to hotspot of device itself it sucks…Still fingbox certainly seems promising.

So you pay them $129 to put THEIR fox in YOUR hen house. Brilliant….