LattePanda development board based on Intel Atom x5-Z8300 “Cherry Trail” processor was launched nearly exactly two years ago on Kickstarter. The board also included an Atmel MCU for Arduino compatibility, and contrary to most development boards on the market, focused on Windows 10 support instead of Linux. The crowdfunding campaign was very successful having raised over 440,000 GBP from around 4,000 backers, and now you an still buy the board and accessories on DF Robot or Amazon.

The company is now back with not only one, but two new LattePanda “hackable computers”, namely LattePanda Alpha powered by an Intel Core m3-7Y30 dual core “Kaby Lake” processor, and LattePanda Delta based on Intel Celeron N4100 quad core Gemini Lake processor. This time beside offering Windows 10 Pro, they are also committed to support Linux. 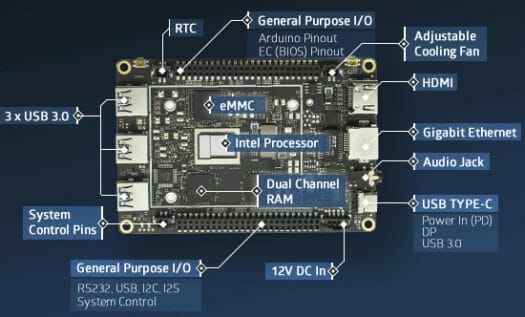 Beside processor, memory capacity, and storage options, LattePanda Alpha/Delta boards share most of the same specifications: 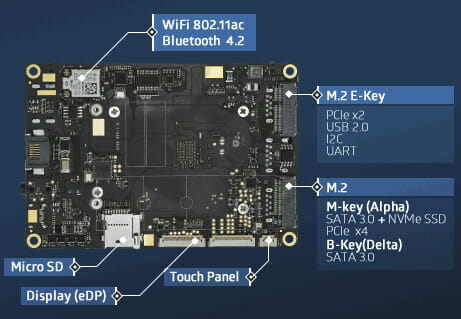 The design is similar to having a Windows 10 or Linux computer with an embedded Arduino board, so it might be convenient as an all-in-one Arduino development platform, or for project where you both need the processing power from an Intel processor, and the real-time and I/O capabilities of a micro-controller.

Both versions of the board are based on low power processors, but they still need to be cooled, so a large heatsink and/or a case with a fan can be provided.

Several variant of the boards will the available:

Just like the first boards, LattePanda Alpha & Delta have been launched on Kickstarter, with a funding target of 125,000 CAD (Canadian Dollars) equivalent to roughly $97,000 US. I’ll use the US dollar equivalent prices for the pledges which start at $129 for LattePanda Delta 432 board, and $269 for LattePanda Alpha 800 board. The complete Alpha 864 bundle with Windows 10 Pro and all accessories requires a $419 pledge. They also have rewards with 10 units. Shipping adds around $17 worldwide, and backers should expect to receive their rewards in May 2018.

LattePanda Alpha is the very first Gemini Lake hardware I’ve seen so far on Crowdfunding websites, and the price bodes well for upcoming Gemini Lake mini PCs which should not be that much more expensive than Apollo Lake ones.

In light of the handling of their other “maker” and embedded platform boards…PASS.

😮 so Gemini Lake will use Intel UHD 6xx variant? interesting…

And first I was thinking Gemini Lake will use same old HD 5xx graphics as Apollo Lake, well quite big boost to GPU side 😀