Mini PCs and tablets are normally distinct product category, but in recent years we’ve seen mini PCs fitted with touchscreen displays, which are somewhat like industrial panel PCs with mostly consumer grade, and with the display placed at an angle. PiPo has designed several of those with models such as PiPo X8 or PiPo X9S.

Shenzhen Qianhai GOLE Technology (aka GOLE) is another company manufacturing “mini PC tablets”, but when I reviewed their first GOLE1 model, I did not find it very useful because a 5″ display is quite inconvenient with Windows 10, and even for Android as if you may not always keep it close like a phone, except for some very specific applications. The company has now launched another model called GOLE 10 (aka F6), still based on an Atom x5 processor, but that should be more useful thanks its 10.1″ touchscreen display with 1920×1200 resolution. I’ve received a sample for review today, and I’ll start by listing the specifications, and checking out the hardware design in the first part of the review

The specifications look somewhat similar to PiPo X12, but the screen is a little smaller, flash capacity lower, battery is not included, and the design is a little thinner, albeit wider. The mini PC comes with Windows 10 Home pre-installed.

The package is a cardboard box with some logo and a graphics showing the device.

Once the side you can see which model you ordered with options for 2GB/32GB or 4GB/32GB configuration, and EU or US plug. 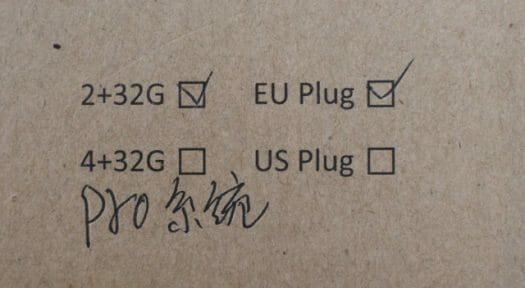 The device comes with a 5V/3A power adapter, and a user manual in English.

The display covers most of the area on the top of the enclosure with a grid at the very top for the two speakers.

The rear panel includes a micro SD slot, two USB 2.0 port, HDMI 1.4 output, Ethernet, the power jack and an RS-232 port. If you’re starting to wonder “what year is this?” and look at your calendar, you don’t need to, as RS232 barcode scanner are still pretty common, and a good match for this mini PC for points-of-sales (PoS).

One of the right side comes with power and volume buttons, a hole for a red (power?) LED, one extra USB 2.0 port, a USB 3.0 port, and an audio jack.

Opening the device is very easy. Just remove the four rubber pads on the bottom, loosen the four screws… 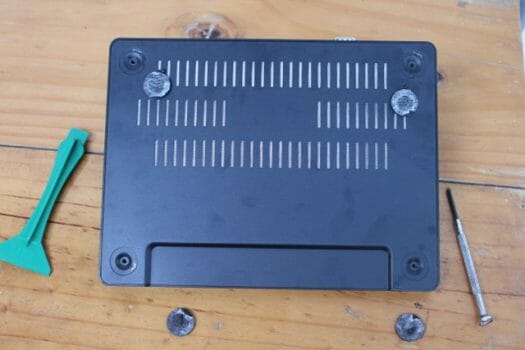 … and the bottom cover will come off easily. Four boards are used in the design from top left to bottom right: USB / button / audio board, main board with copper plate for cooling, RS232 DB9 board, and the touchscreen board. There’s some sort of metal “fabric” on the inner part of the bottom cover probably for EMI protection or further cooling?

The other side of the main board includes a Realtek RTL8273BS wireless module, and SWAPNET NS892407 Gigabit Ethernet transformer, so Gigabit Ethernet is used on the device, and not a slower Fast Ethernet connection. The board appears to be made by a company called CHIPHD, and listed as F6 model on their website.

There’s not that much to see on the USB / button / audio board, mostly connectors.

The serial board feature a  MAX232 chip for TTL conversion to RS232 signaling.

Finally, GOODIX GT911 5-point capacitive touch controller is featured on the tiny board taking care of the touchscreen. The chip is also supported in Linux, so it should be feasible to run Linux with touchscreen enabled if you wish to do so.

I’d like to thank GOLE which kindly sent a review sample. If you’re interested in the mini PC tablet you may contact the company via the product page. For reference, the mini PC is also called T9 on GoleChina website as an industrial tablet/mini PC. [Update: GOLE 10 can be purchased for $148.99 on GearBest with coupon GBG10]

Looks like very similar to PIPO X10 but lower ram and rom ,with added com port

Are you sure the pin hole on the side is for resetting and not an opening for showing the red power LED?
Let’s hope that this version lasts longer (reliability wise) than the PIPO one that does NOT get any support either !

The RTL8723BS’s WiFi driver is landing in mainline from staging in 4.15 and the Atom Z8350 shouldn’t be suffering from https://bugzilla.kernel.org/show_bug.cgi?id=109051 and should have HDMI audio (since 4.11) so you might want to test out how well linux is supported.

this is an interesting device, with a nearly two year old chip set and RS232. I think you’re right in that it’s aimed at some sort of kiosk, control desk or POS application.

GOLE 10 is sold for around $150 on GearBest. See link and coupon code at the end of the post if interested.

CNXsoft, do you maybe know what is the connector on serial board (top of the board, white connector with 5 wires that connect to USB board)? I wonder if would be possible to use that connection for something else not the serial port?
I have Pipo X12 and has a space for 2.5″ HDD but there are no connection options.

@Jean-Luc Aufranc (CNXSoft)
CNX, the 5 pin did not work, do you maybe think 24 pin LIF HDD to Sata might. There is space for 24 pin on motherboard – top middle (Motherboard-Large.jpg).
Since they added 2.5″ space to HDD, should be some connection option for HDD.
Thanks for advice!