Earlier today I wrote about FOSDEM 2018 schedule, and among the various talks I selected for my virtual schedule was “How to build an autonomous robot for less than 2K€”.  Some excerpt from the abstract including a short description of the project, and its “open-sourceness”:

PULUrobot solves the autonomous mobile robotics complexity issue without expensive parts, without compromise. By fearless integration and from-scratch design, our platform can do SLAM, avoid obstacles, feed itself, and carry payload over 100kg, for less than 2,000 EUR.

Application ecosystem can be born around it, as we offer a ready-made Open Source (GPLv2) solution in a tightly coupled HW-SW codesign.

So I decided to have a closer at this project, which can be used as a robot maid/helper of sort, and other applications. 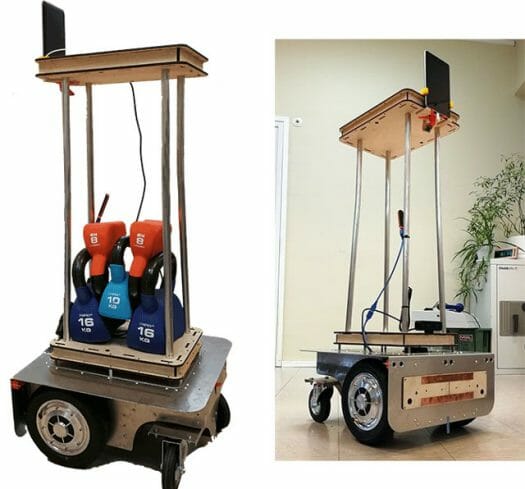 The robot was made by a brand new (July 2017) startup called Pulu Robotics Oy and based in Finland. They have three models:

S & M model are similar in design, except the latter is larger, while the L model appears to be in a earlier stage of development. Pulurobot M comes with the most documentation, so that’s the model we’ll look at in details with the specs of the sixth revision of the prototype:

The company is however working on improvements to lower the cost / improve functionality, and will replace expensive off-the-shelf vision parts with their own 3D vision system supporting 360-degree x 40-degree true 3D vision with 100 000 distance measurement points, 5 to 10 fps. They’ll also add the ability for the robot to find any standard wall outlet to charge itself automatically, and redesign the chassis for lower cost, high-quality mass manufacturing.

While the project is supposed to be open source, they have not released anything yet, but maybe we’ll find out more once FOSDEM is underway. We just know they decided not to use ROS. Applications for such robots include delivery boy, cleaner trolley, recycle bin, coffee trolley, night guard, telepresence, and more.

While development is still in progress, they’ve already sold 25 units they plan(ed) to deliver this month. It’s unclear whether the sub 2,000 Euros price is for the S or M model, as I don’t know the price for such robots. Pulurobot M availability is planned for Spring 2018. More details can be found on the company’s website. You can also watch a demo of Pulurobot M prototype version 4 carrying 58 kg of weights.

Hi everyone! We have been busy doing the robot and the website has not been updated since september 2017. I placed fresh info and pictures there, and also a video telling more than a thousand words what the project looks like now. Pulu M has evolved quite a bit from the situation in the story above. See You at Fosdem 2018, we offer exceptional developer pricing at site, check our website! Pulu is the first robot project that works out of the box (add sim card), is simple enough to anyone to understand and does need programming at all to… Read more »