NXP unveiled another variant of their i.MX 7 Cortex A7 processor last year, and I missed it. NXP i.MX 7ULP offers many of the same features as i.MX 7, but is manufactured using FD-SOI (Fully Depleted Silicon On Insulator) process technology to offer lower power consumption, as low as 15 mW or less in deep sleep, or 17 times less in comparison to i.MX 7 devices, while the dynamic power efficiency is improved by 50 percent on the real time domain (Cortex-M4).

I found out about it thanks to an email from F&S Elektronik Systeme about the introduction of their  PicoCORE MX7ULP module – based on i.MX 7ULP processor – at  the Embedded World 2018 conference. 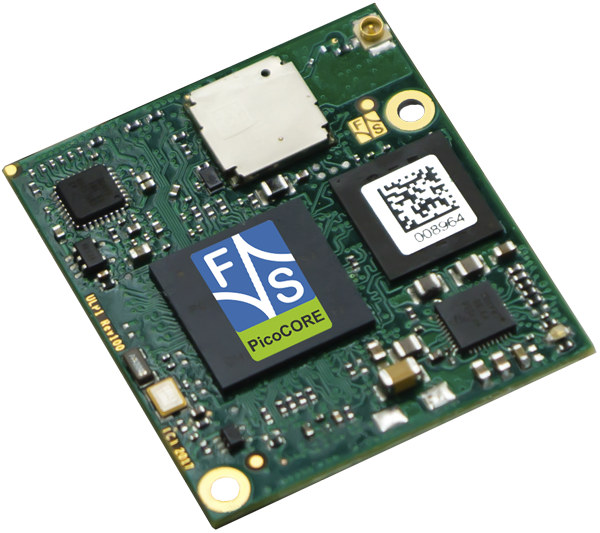 The module is suited to projects requiring small size and/or low energy consumption. The company will provide support for Linux running on the Cortex A7 core via the Yocto Project, and FreeRTOS for the Cortex-M4 core. A starter kit will also be available, but no details have been released at this stage.

Official launch is planned for Q3 2018, and Long Term Availability is ensured until 2028. More details and documentation should eventually be found on the product page.

I’m a little curious why the western silicon vendors are still stuck with old 32bit ARM Cortex A cores. NXP (owned by Qualcomm now) and TI feel like they’ve taken a backseat or re-oriented for slower paced markets.

@Mihai
Many applications in the markets they target do not always require fast processors.
They also have faster processors available or coming up like NXP i.MX 8 (Cortex A72 + A53) or TI AM5728 (Cortex A15, still 32-bit).

@Mihai Say you make a product. I’m planning to make hundreds and hundreds of thousands of them. This product will run quite happily on a single core Cortex A5 or A7 .. If I think like you I’ll not use a perfectly valid product like this because it’s “old” and doesn’t have “64 bits” or “multiple cores” despite the fact I don’t need to access more than 64MB of memory and I only need a few hundred megahertz of cpu power to do what is needed .. so I’ll use something that costs 3 or 4 times as much even… Read more »

@Mihai
Because 90% of their customers are ultra conservative and move to a new CPU core once a decade.

Somebody know a complete straightforward guide of this family processor?

Do you know how much could it cost for 20k units?

@Jean-Luc Aufranc (CNXSoft)
hi cnx, do you know anything about wandboard availibily?
would you lıke yo rewiew a sample?

@jeanz
NXP has pretty decent documentation, maybe not specific to i.MX 7ULP since it’s still a pre-production product, but from a software standpoint, i.MX 7 should be pretty much the same.

@jeanz
The i.mx6 and i.mx7 family of processors mainly target the automotive and industrial market where product availability and on going support is 5+ years. Having done a fair amount of work with the i.mx6sx (A9+M4) they do provide a neat solutions for realtime + Linux. The main drawback is that the M4 is treated as a secondary core and this requires the A9 to boot first and load code on to the M4.

The same feature will be available on the i.mx8.

I agree with others regarding the long term support and availability of a moderate performance CPU. That said, it seems to me that NXP has purposely downgraded their CPUs when moving from i.MX6 to i.MX7, which can be quite confusing. It’s possible that those needing moderate performance will prefer to go with a cheaper i.MX6 at a lower frequency.

Also I tend to find that 1W for a single A7 core at 800 MHz seems a bit high. It’s about twice as what an older 40nm cortex A9 does at the same frequency.

i.mx7 is targeting low power use cases (ie IOT) hence A7 and no GPU/VPU compared to i.mx6. Although i.MX 7ULP is the odd one out as it has a low spec and low power GPU.

After looking closer on NXP’s website turns out I was wrong – the do have quite a few Cortex A72 chips on their roadmap, with the flagship sporting 16x A72s