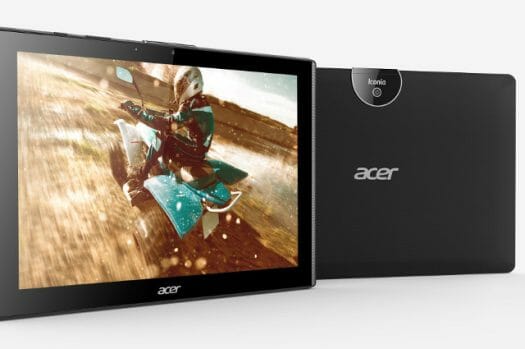 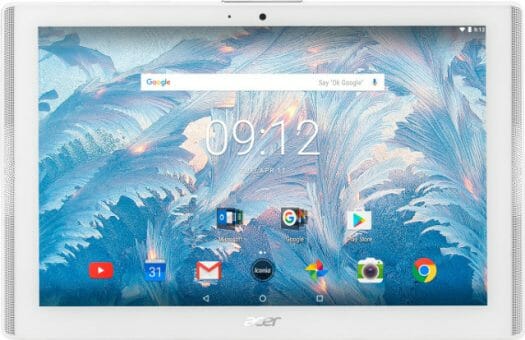 The tablet runs Android 7.0. Acer Iconia One 10 has been selling since last year, but looking for reviews is quite confusing, as the model name has been used for several year, so you really need to check for B3-A40-XXXX models, which can be based on Mediatek MT8163 (Cortex A53), MT8167A, or MT8167B SoC. If you want to latter, the exact model names are B3-A40-K5S2 and B3-A40-K5EJ based on the information provided by the aforelinked page on Acer website.

However, there was also B3-A40-K7JP model that followed the specifications listed above, but appears to be out of stock anywhere I look. That model sold for $103.99 on BestBuy during a clearance sale, and users reviews are generally positive considering the price they paid for it. B3-A40-K6JH is the 16GB storage model, and can be found for $102.99 on Amazon (refurbished). The various model can also be purchased on eBay.

Thanks to Eversor for the tip.

I went looking for a 10″ pad the other day with a higher resolution screen, 32gb of ram, and the like and found a lot of units which said no ship to US. I found many with just that search criteria, and never did find anything useful. Lower cost ones with 1200 x 700 or so and very old android releases were available, but not the better ones. Ideally as I’m buying new, I’d like to get something with a chance of running Android P, but anything that ships to the US would be a good start. I’ll have to… Read more »

I’ve had a few of these devices which I’ve ordered which will not accept US for time or locale as well. Any idea what’s up with that? Just a comment on buying Chinese devices for delivery directly to the US.

@jim st
Since you are based in the US, you may want to check Best Buy.
Getting one with guaranteed Android P support will be hard.

Best Buy is x-ed off my list for now, as an FBI shill operation, given the behavior of their Geek Squad.

Sold out on Amazon now

I wonder if the MT8167A/B are meant to supersede the MT8163A/B. Weaker cpu, but notably beefier GPU — I guess the market has proven the use-cases of those entry-level SoCs to be much more on the GPU side.

@blu
Do you think we’ve reached a level of ‘good enough’ CPU for this segment of the tablet market?

@willmore
Well, I haven’t touched an A35 yet, but from all the A53 encounters I’ve had, and extrapolating to the A55 yet, I think that that performance bracket is perfectly viable for the entry/lower-half tablet segment, whereas there’s always some ‘new challenge’ on the GPU horizon.