Samsung Electronics has showcased a smart / A.I. speaker prototype at SXSW 2018 trade show last month, that can be manufactured at low cost since it relies on a smartphone to provide a processor, microphone, and other equipment. The smart speaker also uses the smartphone’s screen to show an hologram to greet users. Meet Samsung “Aurora”. 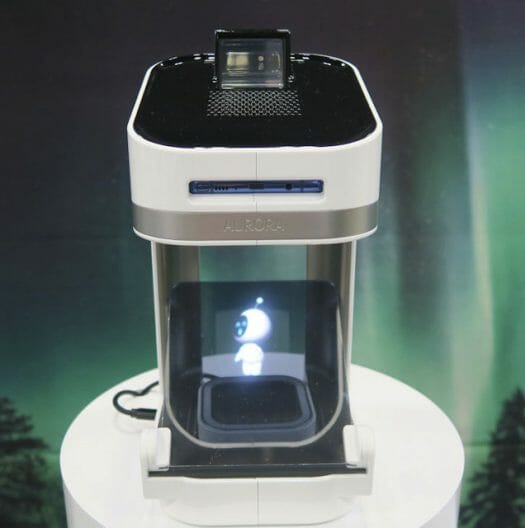 The smartphone is placed horizontally (blue above) in a slot in the upper part of the speaker, and a hologram-like character floats above the Bluetooth speaker included of the kit. The part on the top surface is an optical mechanism using the smartphone’s camera for image recognition.

The smart speaker also charges the phone, but it’s unclear how you are supposed to answer phone calls once it is inserted in the speaker… The concept looks similar to Vinclu Gatebox which we covered in 2016, except it relies on a smartphone.

Samsung is said to have started development six months ago, and Aurora is still being worked on. The release date and pricing are yet to be decided.