Most of the time, when you want to root an Android devices, you may think you have to start your computer, and in many cases, it has to be a PC running Windows, which can be a real pain. Google does not allow apps that provide root access in Google Play, and all you can install are apps that can check whether your device is rooted such as Root Checker. For some reasons, today I needed to root my smartphone (ThL W200, Mediatek MT6589T), and I looked for a method working with Linux, and I did not find any, but I came across Framaroot, an Android app, that allows you to do that within your Android device without external hardware required. 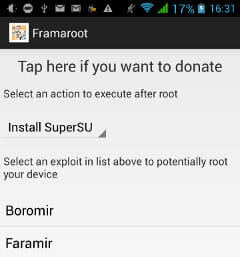 Framaroot is very easy to use and support different exploit in order to provide root access to many devices based on Mediatek (Boromir or Faramir exploits), Qualcomm (Gandalf exploit), Samsung Exynos (mutiple exploits), as well a few devices based on HiSilicon K3V2, AMLogic, and Texas Instruments OMAP3. The full list of devices and the latest version of framaroot are available on XDA Developers Forum.

Here’s what I had to do to root my Mediatek based phone:

Some instructions say a reboot is required, but it worked without a reboot in my case.

If you prefer more visual instructions watch the video below, but do not download the apk via bit.ly/easyrooting as it points to an older version.

hi, my name is kmilo Im from colombia
my problem is, when i touch in boromir
thad says this “failed 🙁 … exploit work but installation of superuser and su binary have failed

@kmilo santamaria
For check with “Root Checker” is the rooting process worked despite the error message.
If not, try Faramir method.